Email sent to CVWM regarding the inclusion of the soldier at their site as he died of illness related to his war service.

To Whom it May Concern,

While doing research on soldiers of the 18th Battalion I was forwarded an image of a death register card or form pertaining the the circumstances of death of this soldier. Pte. D. Knight attested to the C.E.F. and eventually served in the 18th Battalion earning a Military Medal (see attached attestation papers). He returned to Canada and died of tuberculosis on October 11, 1936. The card reads specifically:

Died at Queen Alexandra San., London, Ontario.
Cause – Tuberculosis.
Death was due to service, Authority C[F]C.d.1-12-36.

I believe this documentation constitutes proof of this soldier’s eligibility to be added to the CVWM site and the First World War Book of Remembrance.

Please review the documentation and assist me in achieving the inclusion of the Canadian soldier in these two acts of remembrance.

The response indicates that this soldier died outside of the date determined to be officially included in having their death recorded at the Canadian Virtual War Memorial and the Roll of Honour in Ottawa. 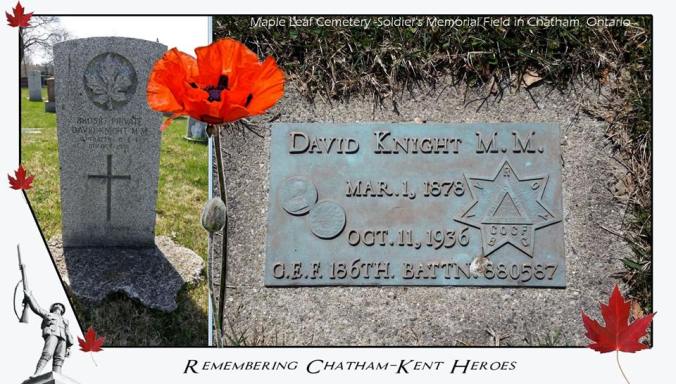 Essentially a Circumstances of Death Register. Note that the determination of death was related to Private Knight’s war service. Source: D. Hueston.