“Killed in Action” He was wounded while leading his company to the attack on enemy positions South of Courcelette on the morning of September 15, 1916, but carried on until the objective was reached, and the position consolidated. He then left to go to a dressing station, but while on the way he was instantly killed by the explosion of an enemy shell.

LIEUT. J. CHILTON MEWBURN, officially reported killed in action on Sept. 15, was the second son of Lieut-Col. S.C. Merburn, A.A.G. Camp Borden. He was 23 year of age; enlisted with the 36th Battalion in July 1915. He was later transferred and sent forward to France at the beginning of the year. Prior to enlistment he was associated with the Bank of Nova Scotia, Hamilton, and was a graduate of Highfield and the Grange at Lakefield. 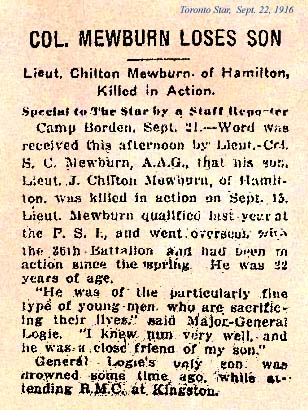 Special to the star by a Staff Reporter
Camp Borden, Sept. 21. — Word was received this afternoon by Lieut.-Col. S.C. Mewburn, A.A.G., that his son, Lieut. J. Chilton Mewburn, of Hamilton, was killed in action on Sept. 15. Lieut. Mewburn qualified last year at the P.S.I., and went overseas with the 36th Battalion and had been in action since the spring. He was 22 years of age.

“He was of the particularly fine type of young men who are sacrificing their lives.” said Major-General Logie. “I knew him very well, and he was a close friend of my son.”

General Logie’s only son was drowned some time ago while attending R.M.C. at Kingston

He Fell While Leading Men in Second Wave of Advance

“Lieut. John Chilton Mewburn, 18th Battalion, was wounded while leading his company in the first wace of his battalion’s successful attack. He displayed great coolness, and continued with the second wave, when he was shot in the head, and instantly killed.”

Lieut. Mewburn, son of Col. Mewburn, was killed on September 15.

Newspaper Clipping – Submitted for the project, Operation: Picture Me

Col. S.C. Mewburn, A.A.G. of the Toronto Military District received a cable yesterday stating that his son, Lieut. John Charlton Mewburn, had been killed in action on September 15th, the date on which the Canadians took so prominent a part in the advance on the Somme.

Lieut. Mewburn, who was the second son of Col. Mewburn, was an officer of the 13th Royal Regiment, Hamilton, in which unit he received his commission in June of 1913. At the outbreak of the war he wished to enlist for active service at once, but was prevented owing to an operation for appendicitis, which he had recently undergone. With the call of the second contingent units, however, he at once offered his services and was given an appointment in the Hamilton company of the 36th Battalion, with which unit he went overseas in June, 1915. He showed a great adaptability for military work, gaining his field officer’s certificate and qualifying also in musketry, bayonet fighting and physical training.

From England he was transferred to the 18th Battalion, C.E.F., at the front. Lieut. Mewburn was in his 23rd year and prior to the outbreak of war have been on the staff of the Bank of Nova Scotia. He was educated at Lakefield and Highfield Schools.

Lt. J.C. Mewburn, 2nd son of Lt.-Col. S.C. Mewburn, Ass’t. Adjutant-General of the 2nd Military District, who recently fell in action was a nephew of Lt.-Col. Mewburn, chief surgeon of Cliveden Hospital, Eng. and formerly of Lethbridge, who has 2 sons, officers in the artillery. Major Guy M. Harris and Lt. S.H. Harris, of Winnipege are cousins of the late lieutenant, the latter holds the military cross.