British Home Child per is attestation papers. Joined underage. Birthday is May 16, 1898.

A British Home Child that served with the CEF. Private Charles Hulley first enlisted with teh 18th Battalion on October 24, 1914 at Galt, Ontario giving his birthday as May 16, 1896. He joined under ages as the database shows his year of birth as 1899 and his gravestone is inscribed with the year 1898.
Regardless, he joined and served with the 18th Battalion until being transferred to the 2nd Canadian Machine Gun Company on December 25, 1915. He served with that unit until suffering concussive shock from shell-fire and was invalided to the 6th Canadian Field Ambulance on August 7, 1916.
Having suffered a hearing impairment and the loss of movement of his two big toes due to a dropped ammunition box he was eventually removed to Canada and discharged from active service.
For some reason he felt the need to re-enlist and on March 21, 1917 with the 63rd Battery at Windsor, Ontario. He served in Canada only and was discharged on 18th of August, 1917 having served with the Forestry Depot.
In his service record he lists his sister as a next of kin. She is a Miss Violet Hulley. He also list a brother, William Henry Hulley, 1st Connaught Rangers, Indian Expeditionary Force as his next-of-kin.
We find him having moved to Alberta where he is buried at Mountain View Cemetery Lethbridge, Alberta, Canada having died February 24, 1969. He was married to a Louisa Appleton Hulley (1896–1986) and has four children recorded having died:
Kenneth Charles Hulley
1921–1948
Cicely May Hulley Lacaille
1927–2016
Lola Patricia Hulley
1931–1978
Sheila Maureen Hulley Ryan
1934–2018
Of note, his service record indicates that he was had “irregularly enlisted” which means that he was probably still under-age when he enlisted in 1917. 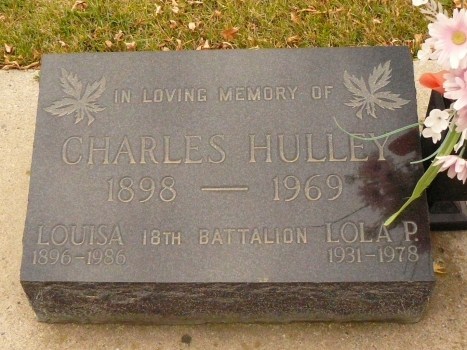 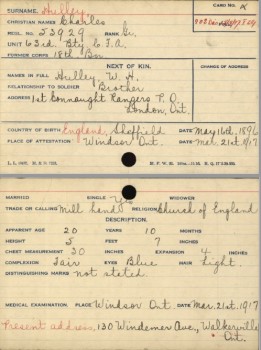