Word has been received by his mother that Pte. Jorman J. Mosher has been wounded seriously. His home is at Highland Cree, but he had lived in Toronto for five years, and enlisted with the 124th Battalion, Going overseas August, 1916.

The death of ex-Private Norman J. Mosher, aged 23, of 924 Gerrard street east, who was found insensible on Tuesday on Bathust St., and who died on this way to hospital, has arounsed consdiderable discussion between Scarboro branch, G.W.V.A. and Headquarters, M.D. 2 here.

Edward Stephenson, secretary of Scarboro branch alleges neglect on the part of the military authorities and asks for a full enquiry into the nature of the treatment given Mosher.

Mosher enlisted in the 124th Battalion in January 4, 1916. Arrived in England, he transferred to the 18th Battalion in France, where on August 17, 1917, he was gassed, and very badly wounded, his body receiving 19 wounds in all. He returned to Canada a little over a year ago with several pieces of shrapnel in his body, and in a very nervous condition.

“He was sent to Coburg Hospital,” Mrs. Charles Laing, his sister, told a Star reporter. “After a short time there he came to his home at Highland Creek, Ontario, and said if he stayed at the Coburg Hospital any longer hew would certainly would go crazy. He was terribly nervous all the time and I think he was receiving treatment for it. Father took him back there, and stayed for a while longer. Then he was transferred to Park School here. He came to us last fal and said he couldn’t stand things any longer. He went to [h]ighland Creek and worked there for a while, then came here and had been working for the Rogers Coal Company. 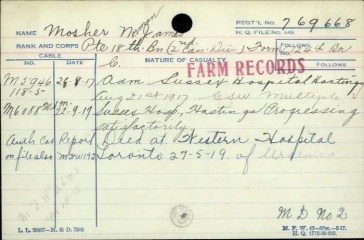