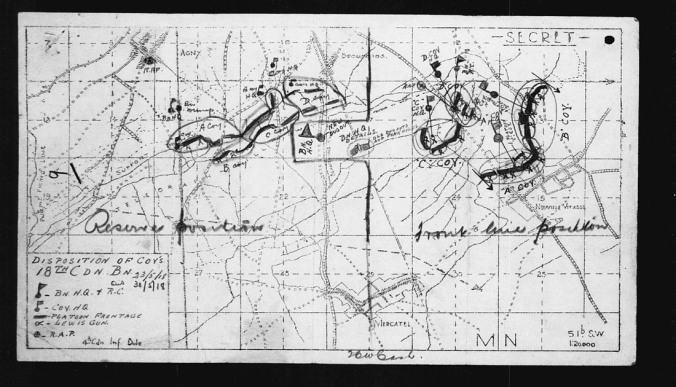 Map of 18th Battalion Positions just outside and to the north-west of Neuville-Vitasse, Arras Sector, France. Note the notation “A” Coy. It was forward (south) of this position that the action probably occurred.

4th Brigade, which the 18th Battalion was part of, after an opportunity in early May to clean up, rest, refit, and make up equipment shortages after their last engagement in the front line moved into the Mercatel sector of the line south-west of Arras. Of note was the arrival of two United States Army officers[i] and four non-commissioned officers[ii] on May 3, 1918 to be attached temporarily to the battalions of the Brigade to gain first-hand experience of the conditions of trench warfare in the Western Front. The weather was often pleasant as the Spring of that year formed towards Summer and the Americans where “much impressed” with their tours in the front lines.

Towards the middle of the month the 4th Brigade engaged in strong patrols for defensive and reconnaissance purposes and, generally, the activity of German artillery, ground actions, and air power were not unduly aggressive and on May 16 the Brigade went into Divisional Reserve and had the opportunity to rest and refit. 4th Brigade Headquarters Company played a game of baseball[iii] against the 18th Battalion May 19 besting them with a score of 11 to 9[iv].

On May 23 the Brigade took up positions in the Neuville-Vitasse sector which was east of their previous engagement at Mercatel.

During May 24 the 18th Battalion attempted to engage an enemy post that Lieutenant McRae and three scouts had identified during a patrol. Owing to moonlight this patrol was not able to get close enough to positively identify and report on the post.

It appears that an effort to engage this post was carried out by a squad or platoon of the 18th Battalion. But not during night time. During the day. The 4th Brigade War Diary records the weather as “fine and warm” and under such ideal conditions for defense Armourer Corporal Kelley was to engage and close with the enemy, earning the Distinguished Conduct Medal.

As the 18th Battalion War Diary would tell it:

Desultory shelling by enemy over who area and near country. A courageous act was done this morning by #212203 Arm. Cpl. D. A. KELLEY. At 8.15 Cpl. Kelley with a wiring party left our trench at N.19.a70.89 and proceeded up an old communication trench towards enemy lines to definitively locate positions and defences of enemy post located in this trench. Cpl. Kelley was able to get close to this post and found 3 Germans on sentry duty. He rushed the barrier in front of this post and shot 2 of the occupants and dragged the third across the barrier. Several of the enemy were seen to run back along the trench. An enemy machine gun opened up and bombs where thrown but Cpl. Kelley returned safely to our line with his prisoner. Shortly after Cpl Kelley had returned [to] our line, a party of the enemy was seen to come into and down the trench toward raided post. Party estimated at 15 to 18. Several of them appeared on sides of the trench looking around apparently trying to locate the prisoner we had taken. Capt. Dougall and sentries in A Coy line immediately opened fire and six of the enemy were seen to fall and the remainder disappeared.[v]

But the War Diary does not quite tell the entire story as the 4th Brigade diary adds some more dramatic details:

At 8.30 a.m. Corpl. KELLY[vi] of 18th Canadian Battalion under cover of party of riflemen and grenadiers, proceeded to enemy sap by crawling through the grass and underneath barbed wire. He rushed the post killing two Germans and on seeing five others reach for their rifles he grabbed the sentry on duty and made for our lines, being fired on continually; one bullet hit is revolver smashing it and another grazed his ear. He returned at 9.30 a.m. with his prisoner, after being out an hour. The prisoner belonged to the 65th I.R.[vii], 185th Division and was in charge of the post.

So, after reconnoitering and determining a course of action with the assistance of a party of riflemen and grenadier, in broad daylight, Kelley attacks a German squad and makes off with a prisoner, barely escaping with his life. A destroyed revolver and a bullet graze stark reminders of the near thing that action was for him.

The D.C.M. commendation summarized the action but, in no way, pays the action of Corporal Kelley the credit for his bravery and actions on that day:

For conspicuous gallantry and devotion to duty. This non-commissioned officer went forward alone to attack an enemy “pill-box,” which he approached from the rear, crawling through the wire defences. Entering the place, he shot two men and seized another, firing his revolver into a party of six as he emerged with his prisoner, whom he brought back to our lines under heavy fire from the enemy posts, that by now were thoroughly alarmed. He completed his enterprise in an hour’s time, displaying intrepid coolness and gallant determination that were a fine example to all who witnessed his action.[viii]

[i] Captain Sterling attached to the 18th Battalion. Captain McMurtry to the 21st.

[ii] Sergeants McGovern and Berner to the 18th and McGay and Weller to the 21st.

[iii] It is interesting to note the prevalence of the sport of baseball being played in the war diaries and other literature. Though a significant number of C.E.F. soldiers hailed from the British Isles the playing of cricket, as yet, has no mention in any of the sources accessed.

[vi] Kelley’s name in his service record was often misspelled this way.