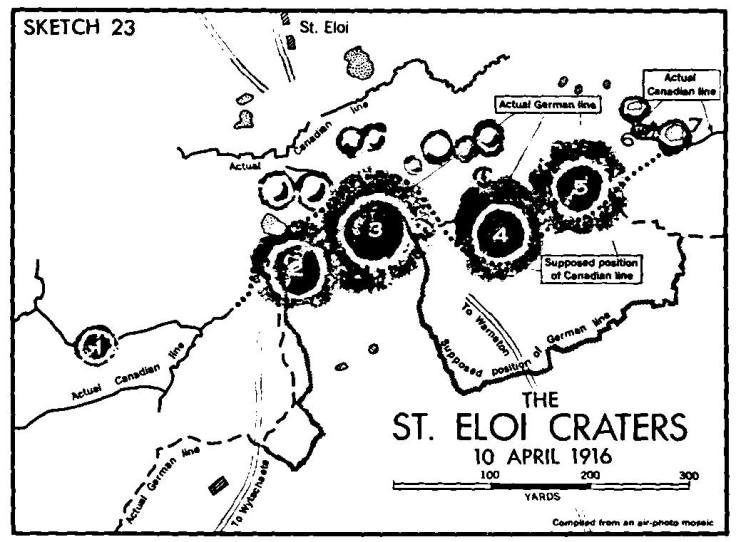 In the meantime, a further order from the Brigade to detail 50 bayonet men to support the details in paragraph 4, Bde. Order 39, was received by telephone, and in addition, a officer and 25 men were to report to the 21st Battalion to Capt. Lindsay, Brigade Grenade Officer, who was at BATTLN H.Q. 18th Battalion.

The parties detailed in paragraph 4, with the additional 50 bayonet men, were organized and went forward under Capt. Loghrin. The bombers were to be turned over to Mr. Clarke, who was on the reconnaissance, when these parties reached a point about contour 40, 0.8.a.8.3. Progress was delayed by grenadier[s] and carriers of the 20th Battalion. The Stokes gun commenced firing 6 minutes in advance of the time noted in Bde. Order 39. This was immediately followed by a heavy enemy bombardment, creating such a barrage that the parties could not get through. Mr. Clarke, in charge of the bombers, reported that he could not get through the barrage [with his] men and I called the Brigadier by phone, who said the attack must proceed. I [ordered the] officer to return, which did, and he was wounded and I have no report from him, but the results of  the night’s operations was that there was no change in the situation from the previous night’s operation.

After a conference at Brigade H.Q. it was decided that another attempt should be made to get in under the lip of crater No. 3 and consolidate a line with the other crater along the northern lip.

For this purpose, the following organization was made under Brigade direction:

“Two bombing parties of [3] officers and 22 O.R. each were supplied from the 18th and 20th Battalion, 2 Platoons from ‘A’ Co., 18th Battalion, under 2 officers, as a covering party and 100 pioneers as a working party. These parties all went forward, and as reported by the O.C. ‘A’ Co., reached a point about 15 yards in advance of the old ‘Q’ trenches, when they were [discovered] and 1 platoon occupied the ‘Q’ trench and the other platoons fell back in the old ‘R’ trenches, as they understood them, the old ‘Q’ trenches not being large enough to hold all the parties. The retirement was [forced] on account of the severe [bombardment]. Two officers [report] that —- workmen, and that the position  —- maintained. The pioneers retired and helped the platoon which occupied the old ‘R’ trenches, until just before dawn, when they withdrew. These two platoons ‘A’ Company [held] the position until relieved by the 25th Canadian Battalion on the night of 11/12th April, who took over the exact position ‘A’ Company held.