I would like to pay a special tribute to Capt. Dick Shuttleworth, another of our splendid officers who never forgot the men who served with him in France and Belgium, many under his own command. When some of our members go to Westminster, they often call and see the Captain and we are always glad to hear from him.

The Captain has been a long time member of our London Branch and while he has not been too active owing to an annoying physical condition, he is always delighted to help and interested in everything that is taking place in the different branches.

I remember the Captain at Queens Park[iii] when he was in command of the Base Company, as their cots were directly behind the members of our Company. Each morning those stationed at the Park usually went out and ran around the Park about three times. The Base Company usually went out and ran the park and seemed to run farther and longer than the other groups. This extra training really paid off when the Base Company were awarded the Efficiency Cup which was presented to Capt. Shuttleworth by the Duke of Connaught at a dinner held in a London hotel. The next day the Base Company was broken up, the men going to the different Companies and the Captain to “C” Company under Major Sale. Captain Shuttleworth describes Major Sale as an officer who didn’t believe in spit and polish, but instilled trust and confidence in the men of C Company. The Major was later wounded when a rifle grenade came over and exploded at his feet. He died that night in the La Brasserie dressing station. There are many incidents in the service of the Captain but space will not permit us to describe them.

Let me close by simply saying that the Captain was a good officer and the Battalion members who are left have a great affection for him.

The Battalion had so many brave and gallant officers during the entire war that is was a pleasure to serve under their command. Many of them are gone but they will never be forgotten as long as our Association shall survive. 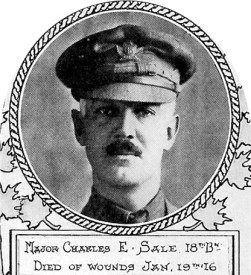 An unknown author relates some of his experiences regarding an officer of the 18th. He obviously admired this officer as he wants “…to pay a special tribute,” to the officer and goes on to tell his story. What is curious is that the author does not make any direct connection with Captain Shuttleworth and it appears that this soldier never served under the captain. Captain Shuttleworth’s reputation is memorable and impacted this soldier enough for him to remember specific details regarding Shuttleworth.

We are taken back to the founding of the Battalion and some of the experiences of the men of the Battalion under Captain Shuttleworth’s command. His command runs every morning farther than the other companies and his work is recognized formally by a presentation of an “Efficiency Cup” by the Governor General of Canada, the Duke of Connaught. Though his company is well rewarded, it is “broken up” sending his men to other commands and he becomes, most likely, a platoon commander for “C” Company under Major Sale.

The author closes the “memory” by relating the death of Major Sale and reinforcing the affection many of the men of the Battalion and then reinforces that “…so many brave and gallant officers,” served with the Battalion throughout the wary.

Western Fair Grounds Overview: This is the location of Queens Park used by the 18th Battalion to train during October 1914 to April 1915.

The “memory” is simple and concise but digging a little deeper it reveals some aspects about the Battalion which may have subtly entered the story.

The work Captain Shuttleworth did with the Base Company was recognized by the presentation of the “Efficiency Cup”. The Base Company was the company responsible for the administrative and command functions of the Battalion. Shuttleworth’s efforts to keep this important company in top condition and comportment as soldiers was probably a reflection of his feelings of how important this command was to him. He would have been under the scrutiny of the command officers of the Battalion and he served directly under them as well – his efforts would reflect of his superiors.

But after this event, his command is broken up and the men disbursed throughout the command. Was this an effort to spread out skilled and capable men into the other companies of the Battalion or was it an effort to break up a strong cadre and clique of men who had a possible undue and detrimental influence of the command structure of the Battalion? Give the obvious high regard by the author for Captain Shuttleworth, the latter example appears unlikely. Additionally, Captain Shuttleworth’s post-war contributions to the 18th Battalion Association and, later, the Legion (Vimy Branch: London, Ontario) reinforce his positive attributes and abilities as a key member of those organizations.

The “memory” does not broach on the details of the command relationship between Major Sale and Captain Shuttleworth. Major Sale was ten-years the senior (36-years old at enlistment) to Shuttleworth and a dentist. He wanted to see active service in preference to be a medical officer in the C.A.M.C. and this decision would lead to his death by wounds from a German rifle grenade on January 17, 1916. Major Sale now had a very capable platoon leader.

What is interesting to note is Captain Shuttleworth served with the 18th Battalion from his enlistment on October 20, 1914 until he was posted with the 1st Canadian Command Depot on June 16, 1916. He did not serve the entire war with the Battalion, yet his impact as an officer in command of men is well and diligently remembered.

A summary of his war service:

Born London, Ontario March 26, 1888. A manufacture he had 8 years of militia experience. Served with the Battalion from October 20, 1914 until October 30, 1915 when he was sent to the Canadian Base Depot to conduct drafts for the Front. He was SOS the 18th Battalion on June 16, 1916 was ported to the General List and assigned for duty with the 1st Canadian Command Depot at Monks Horton, Kent. He then returned to Canada of disposal of the Adjutant General on May 3, 1917 and was SOS when demobilized on June 16, 1919.

After the Armistice Captain Shuttleworth was active in his local legion with involvement with the “Vimy Orchestra” as a violin player and later as the President (1944 – 45) of the branch.

The “memory” extends the narrative of the 18th Battalion experience. Men where based at Queens Park, the current Western Fair grounds, and part of their conditioning involved running. Captain Shuttleworth ran a tight ship and his command was recognized for his efforts with an “Efficiency Cup”. His behaviour towards his men in his command and the members of the Battalion after the war is remembered with affection and the author shares his perspective to remind the other members of the Battalion about an officer that represented one of the best of a cadre of men who held command over the other ranks.

It appears that the documents were written in the early 1970s, a full 50-years after the end of The Great War and are a valuable social history of soldiers’ experiences as told in their own words about the events that happened a half-century ago to them, and now a full century for us.

[ii] The transcription and research of these “memories” is an attempt to connect and identify the people mentioned in the stories with some accuracy. This is, in no way, a definitive identification of the people in the stories but there is high confidence that these are the men mentioned in the “memories”. In some cases, the story may identify people, places, dates, times, and details inaccurately and, where possible, these details are noted. Given that the men relating these memories would be in there late 70s, at the minimum, their errors can be forgiven. The stories related stand on their own as a social history of the experiences of the men of the 18th Battalion.

[iii] The Western Fair grounds are located where Queens Park was located.