“Died of Wounds.”
He was in the front line in charge of two platoons on the 10th. April 1916. After darkness had fallen he went out in the front line to search for the body of a man who had been killed on the previous night, and in these circumstances was wounded in the head by enemy rifle fire. He was brought in at once, and after first aid had been rendered was taken to No. 10 Casualty Clearing Station, where he succumbed at 3.30 a.m. on the 12th. April 1916.

The soldier mentioned above may be Lance Corporal Sando, 54325.

Clipping from the Calgary Daily Herald May 8, 1916

That Lieut. Frank Lawson, of Calgary, who was mentioned a short time ago by The Herald, was killed in action in the St. Eloi fight, made the supreme sacrifice while heroically bringing in the dead and wounded from “no man’s land” after the attack on April 10 had ceased is the word which the father, F.J. Lawson, has received from the commanding officer of his son’s late battalion.

It appears that during the day he had fought valiantly in a position on which the Germans concentrated a fierce bombardment, but he escaped unhurt. In the evening he fearlessly set out to bring in the dead and wounded, and it was while undertaking this work that he fell a victim to a German sniper.

How the gallant young Calgarian was hit is told by the commanding officer as follows:

“It is with personal regret I am notifying you of the death of your son, Lieut. F. Lawson, of my battalion. To know him was to love his amiable disposition. He was devoted to his duty and to his men, was liked by his fellow officers, and we miss him.

“He did his duty and did it well, fearless, painstaking and cautious. He had led his men into a position under bombardment that was simply hell on earth. He got through all right, only to be shot by a Hun sniper when getting in the wounded and dead from “no man’s land” between the trenches at night, after the battle was over.

“The bullet entered his right ear and lodged in the spine. When he left the aid post he was conscious and quite cheerful, not thinking the wound serious. He was wounded on the night of April 10 and was admitted to No. 10 casualty clearing station next morning. He was still conscious on arrival there. His wound was not considered dangerous. He became worse, however, and on being operated upon it was discovered that a clot of blod [blood] had formed on the brain. He survived the operation all right, but never rallied, passing peacefully away early the next morning, April 12.

“It seem hard that such noble young men are being sacrificed. Please accept my sincere sympathy and rest assured he died a soldier, discharging his duty well.”

Although Lieut. Lawson held his major’s papers before leaving for France, he was so keen about getting into the firing line that he volunteered to take a lieutenant C.G. in a battalion that was already at the front.

UNDAUNTED BY DIFFICULTIES
Lieut. C.H. Kerr in Thick of the Fight.

Daily papers of April 24th gave the following particulars in which Lieut. C.H. Kerr, eldest son of Rev. W.E. Kerr, Vancouver, B.C.[i], and nephew to Mrs. J.J. Gilpin and W.H. Kerr, Brussels, played his part at St. Eloi, France [Belgium], on Sunday, April 16th[ii]:- In places even the hardest [soldiers] were baffled by the mud. At time even the most skilled mistook their bearings. Undaunted by difficulties of their surroundings, our officers and men face the situation with splendid courage and determination.

One night sections of the new German line were attacked and bombed by the men of our 18th (Western Ontario), 19th (Central Ontario) and 21st (Eastern Ontario) Battalions. On our left the bombing parties were under the command of Lieut. B.O. Hooper of the 19th Battalion and Lieut. C.H. Kerr of the 18th Battalion, and were accompanied by a working party under Lieut. Lawson[iii] of the 18th Battalion. The night was misty and progress over the broken ground was very slow. Lieut. Kerr acted as guide and eventually a position was reached close to the German line. A slight lifting of the fog revealed a number of the enemy, who at once hurled a shower of bombs in the direction of the men. Most of the bombs fell into the crater, on the edge of which our party was lying. Our men retaliated vigorously. The mist soon thickened and as there had been no opportunity to adequately reconnoiter the ground it was decided to abandon any further offensive action.

Meanwhile Lieut. Lawson had found the remains of an old trench a short distance to the rear and commenced to rebuilt it. Although our bombing parties were withdrawn at dawn, he remained in this advanced position with his party thought the following day, having been well supplied with bombs carried to him by Lieut. Hooper and Sergt. Jackson of the 19th Battalion.

During the fighting in the crater Lieut. Kerr was wounded in the face, but until he collapsed continued to assist Lieut. Hooper in controlling operations.[iv]

The first intimation of Lieut. Kerr’s injury to his parents was a cablegram from the Duchess of Westminister [sic] Hospital, at Lotonuguet [sic], France[v], with “Wounded slightly, don’t worry.” Next day a telegram from the Military Department at Ottawa told the story of his being wounded in the face and was suffering from shell shock. Lieut. Kerr had a promotion 3 weeks before his wounding to Battalion Grenade and Intelligence Officer. He has 100 specially trained men under him and has charge of the grenade section of the whole 18th line and must keep in tough with all the enemy’s movements. The work puts him right in the front line of trenches and in charge of “no man’s land,” with perils imminent every hour. If nothing unforeseen arises, of if the shell shock is not too severe, he will doubtless soon be back to his dangerous post. His old friends in Brussels hope so and trust a guardian angel my watch over him as he does his duty for Empire. Lieut. Kerr was moved to a hospital in England.[vi]

[iii] Lieutenant Frank Lawson was wounded on April 10 and admitted to No. 10 Casualty Clearing Station with wounds to his ear and head. He would die of those wounds on the next day.

[iv] The war diary reports that action resulted in the deaths of 9 men, the wounding of 12, and 1 man missing.

[vi] After he recuperated, he may have returned to Canada. He did continue his service with other units of the CEF. 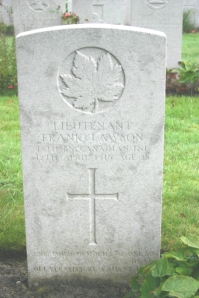 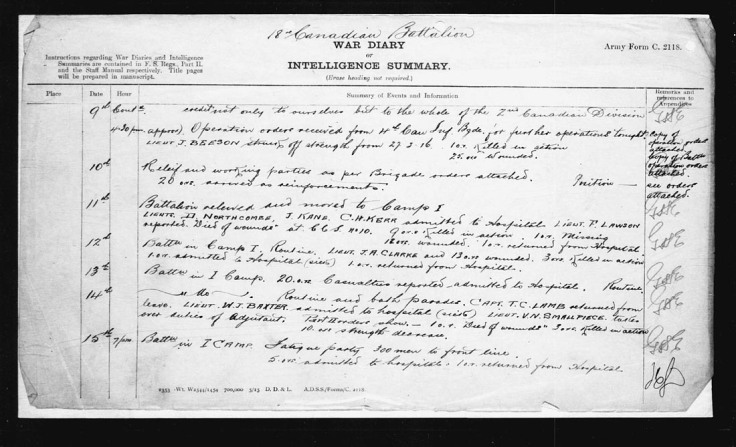 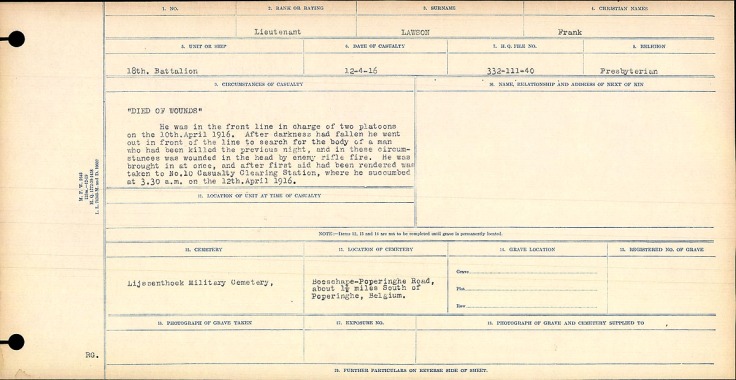 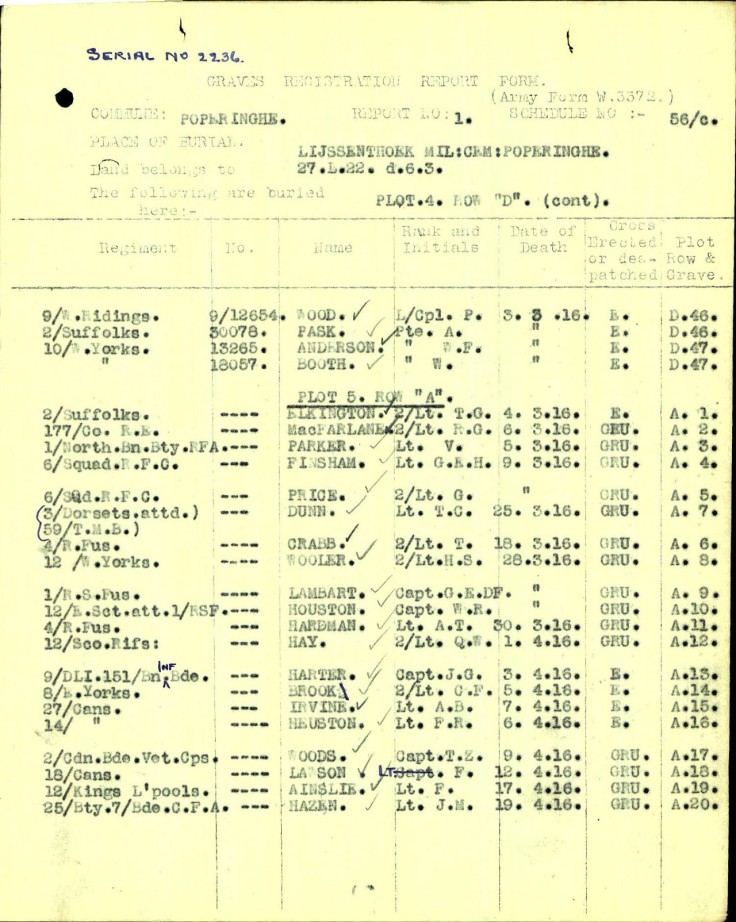 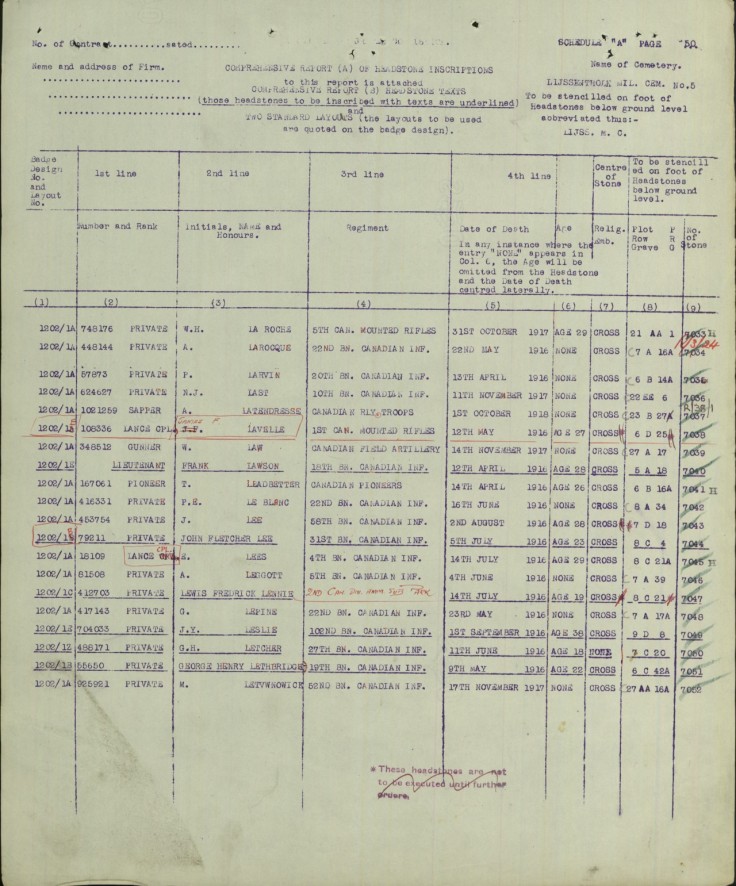 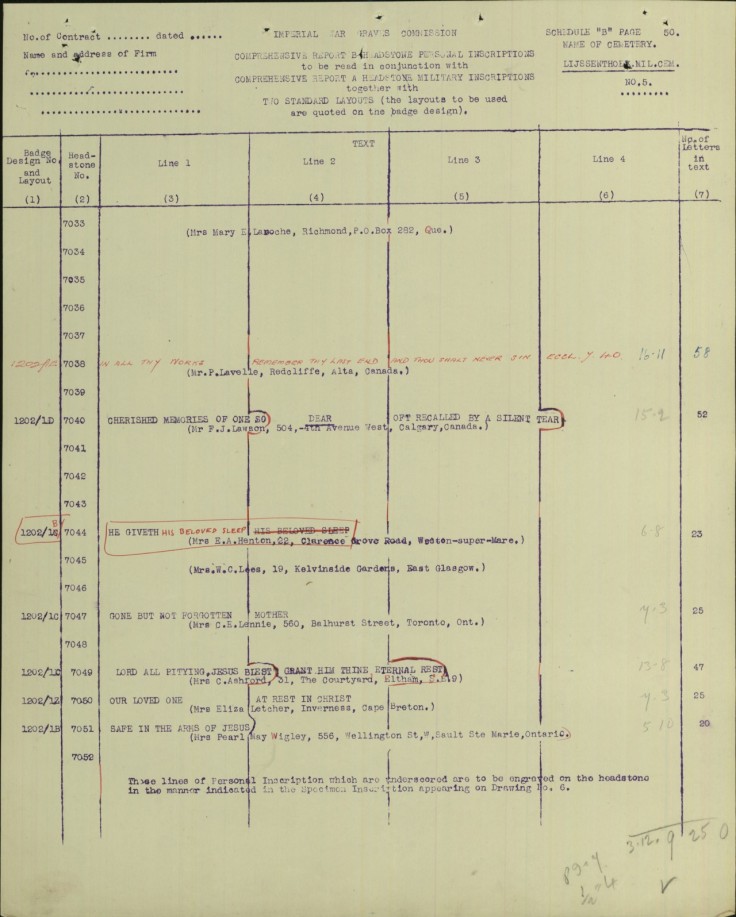 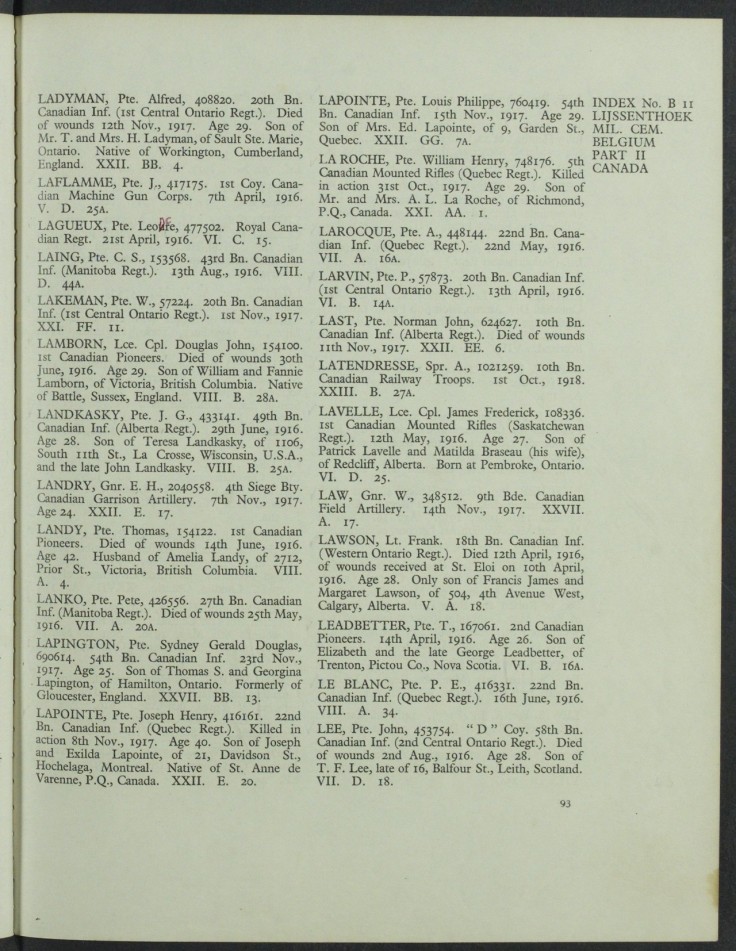