Major Gordon John Ingram was one of the original officers of the 18th Battalion. He was an owner of Smallman and Ingram Limited, at one time the largest department store in Western Ontario. There is some good biographical information here and here outlining his relationship with Smallman and Ingram. The family was well known in the London Community and his son, Kenneth Ingram, was the secretary-treasurer of Smallman and Ingram, while his brother John was president. They lived beside each other on Dufferin Street.

“Order of the British Empire, MBE; 1914-15 Star (MAJOR G.J. INGRAM. 18/CAN:INF:); British War and Victory Medals (MAJOR G.J. INGRAM.); War Medal 1939-1945; and Colonial Auxiliary Forces Officers’ Decoration (Major G.J. Ingram, The W.O.R.). Naming is officially impressed on the WWI trio and privately impressed on the CAFD. Four WWI/WWII medals are laminated, original ribbons, court mounted with swing bar pinback, extremely fine. Accompanied by copies of his Attestation Papers, Service Records, Medical Records, Award Documentation and government correspondence. Footnote: Gordon John Ingram was born on June 12, 1883 in London, Ontario. He was promoted to Major and signed his WWI Attestation Paper with the 18th Battalion CEF, on October 19, 1914 in London, Ontario, stating that he was married, that he had had fourteen years previous military service with the 7th Regiment Fusiliers and his trade was that of Merchant. The Battalion sailed for England on April 18, 1915 under the command of Lieutenant-Colonel E.S. Wigle, with a strength of 36 officers, including Ingram, and 1,081 other ranks. He proceeded to France on September 7, 1915, disemarking [disembarking] in Le Havre, France on the 8th and was detailed in early October for special duty with the 2nd Canadian Division Headquarters in the field. Ingram arrived at the Canadian Base Depot from the Front for Conducting Duty, October 30, 1915, later carrying out duties of Division Claims Officer in addition to his other duties, November 1915. He was struck off strength of the 18th Battalion on being appointed to the command of a new overseas battalion in mid-January 1916, then proceeded to Canada at public expense on January 28th. He was placed with H.Q.M.D. from March 1916 to September 1917, where he was struck off strength of CEF and returned to the 7th Fusiliers until January 31, 1918. Ingram spent the next eight years with the 1st Brigade Staff, unitil February 1, 1926, where he joined the 2nd Reserve Battalion Canadian Fusiliers (MG), until December 15, 1936. From this point, until June 1, 1940, he was in the Reserve of Officers and was promoted to the rank of Lieutenant-Colonel on November 7, 1938. He signed his WWII Attestation Paper with the Canadian Fusiliers in 1940, stating that he was married to Elma Ingram and again returned to the 2nd Reserve Battalion Canadian Fusiliers (MG) until June 1, 1945. He was stationed in Canada and suffered an injury to his shoulder while attending a lecture at Fieldcraft on June 15, 1942. Ingram retired from the Canadian Army on September 12, 1948 at the age of 65, with the rank of H/Lieutenant-Colonel. He lived another ten years, passing away on December 7, 1958 at the age of 75.” 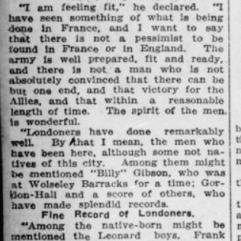 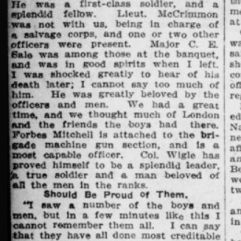