Another lad connected with Peebles laid down his life for King and country – PRIVATE ARCHIBALD FLEMING VEITCH who died of wounds on the 22nd June. Private Veitch was a son of James Veitch, who served his apprenticeship as a cabinetmaker with J. & M. Smith, Dovecot Works, Peebles, and at that time lived at 74 Old Town, Peebles, with his sisters. Mr. Veitch went to Canada a good many years ago, and his son joined him the Colours and came over with one of the Canadian Contingents. Mr. Veitch’s eldest son also served at the front.

Pte. A. Veitch is Dead

PTE. ARCHIBALD VEITCH, son of Mr. and Mrs. James Veitch, of 477 Roncesvalles avenue is officially reported to have died of wounds on June 22 in the No. 10 Casualty Clearing Station. His mother received a post-card the other day saying “I am back in hospital again. I got his with shrapnel in the leg and hip, but am getting along nicely. I hope to be in England soon. Will write son again.” in the evening of the same day the word came from Ottawa that he had died from gangrene in the left leg.

Pte. Veitch was 18 years old and had been in the trenches since February. He went overseas with the 36th Peel Regiment and transferred. On April 13 he had  shoulder fracture when a dugout caved in; but was back on duty and reported feeling fine up to June 20, when he received the fatal wounds. In his letters he always told his mother that everything was fine and not to worry about him. His brother, William, has been in the trenches since Christmas, and, so far, is safe.

They were born in Edinburgh, Scotland, and came to Toronto with the family six years ago. Their father is a carpenter in the employ of the Toronto Street Railway Company. The boys are on the honor roll o Bonar Presbyterian Church. 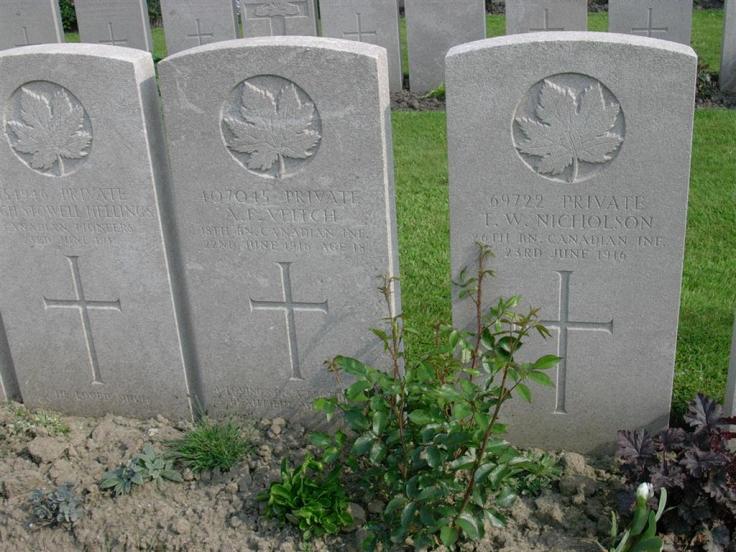