Source: Notation on back of Paymasters document.

This soldier was the father-in-law of Private Albert West, reg. no. 53521. This information was provided by a family member from the 18th Battalion Facebook Group.

Veteran of the First Great War and resident of Woodstock for many years, John DOUGLASS, 310 Hay Street, passed away this morning at Woodstock General Hospital, in his 73rd year. He had been in ill health for some time.

Born in Tain, Scotland, he was the son of the late Mr. and Mrs. William DOUGLAS(S). He lived in London, England for some time and came to Canada in 1905 and to Woodstock, where he has resided since, with the exception of the time he served in the First Great War with the 18th Battalion, C.E.F., in which he enlisted in London, Ontario. He was a member of the Woodstock branch of the Canadian Legion, also a member of the Dundas Street United Church. He was a plasterer by occupation and worked at this trade before and after his war service.

The late Mr. DOUGLASS is resting at the E.F. MEADOWS funeral home where the funeral service will be held Saturday, September 15th at 2 pm with interment in Hillview Cemetery.
……………………………………………………

The funeral of the late John DOUGLASS, 310 Hay Street, whose death occurred September 12th, was held Saturday afternoon from the E.F. MEADOWS funeral home. The funeral was conducted by Rev. L.C. McROBERTS of Dundas Street United Church, assisted by Major J.P. DICKINSON of the Salvation Army also padre of the local branch of the Legion, and was largely attended by relatives, friends and a large representation of the Canadian Legion. Many beautiful floral tributes expressed the sympathy and esteem of friends.

Interment took place in Hillview Cemetery where the Legion service was conducted, in charge of C. McALPINE, vice-president of the Woodstock branch and Major DICKINSON, chaplain.

Summary of Service for Private John Douglass, reg. no. 53448 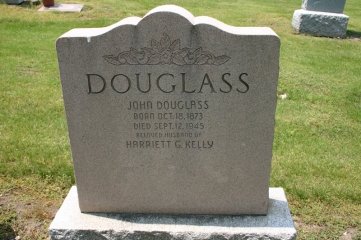