Source: Via comment by Kristen Den Hartog at the 18th Battalion Facebook Group. Re. post about Pte. John Dobson. This soldier helped recover Dobson after he lost is leg at Arras August 1918. 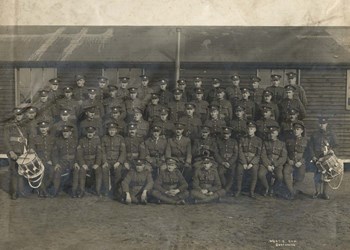 Letters from the Soldiers

IN HOSPITAL IN WALES

Just a few lines to let you know of my whereabouts, and hoping you are fine and everything O.K. as it leaves me at present. This is the fourth hospital I have been in since I was wounded. Thinks this place is on the coast of the Irish Sea. What I have seen of the country appears to be very pretty.

Did you get the letter I wrote from the hospital in France? I was sorry I did not get to the hospital Bertha was in, but maybe I will get a chance again. I was sound asleep a week ago to-night about 12 o’clock when the nurse came and said, “Hi Canada, do you want to go to Blighty?” Imagine my surprise, as I thought I would be going back up the line in a day or two. So we took the train down to a seaport on the English Channel, got on the boat from there and came up through Chatham and the outskirts of London to a hospital in Cardiff city, stayed there in bed till yesterday and then came down here. I like this place fine. I am up now and able to get around well only I cannot wear my boot on my left foot yet. We get good rations here, lots of sleep and a free concert in the hospital every few nights given by the local town. And a couple of days ago a woman came around and gave me a kit from the Canadian Red Cross Society, consisting of writing material, shaving outfit and teeth cleaning powder.

The worst of is I will likely have to go back to the reserve at Witley, but its is a good rest anyway. I haven’t heard anything about the fellows around home fared out. N. McDermid got wounded in the leg.

Did I tell you how I got hit? Don’t believe I did. Well, every time we go in the line there are always so many left out of the machine gun courses, etc., and if they are going into battle these men have to act as stretcher-bearers. Well I was left out of the trip to the battle in front of Arras, but followed up and took in wounded. Everything went along O.K., was on the go practically all day and night. The second day I, along with three other chaps, was scouting over the previous day’s battle ground for any wounded, and there was a bunch of reinforcements passing us going into action, and all of an instant a German aeroplane swooped dow[n] and fired on us with a machine gun. I heard the bullets swish down and felt my toe sting, so beat it back and put my field dressing on, then went back to the ambulance and it was not time till I was miles away from the din of battle.

Our platoon sergeant was hit in the same way on the Amiens front, only he was in a trench. Let me know in your next letter if Jack Dobson is still living. I helped to carry him out of a shell hole. A dud shell had struck one of his legs. A dud is a defective shell that does not explode.

I have a few German souvenirs to send home. They are not much, but would be nice to keep.

Have you lots of wood cut for the winter? It’s one thing [for] certain, the war won’t last any more than a year, but I expect there will be a lot of hard fighting yet. It sure has been swaying our way lately. The German soldiers are getting very disheartened. If there had been lots of fight in them they sure would have got me in the Amiens battle.

Think that is all for now.