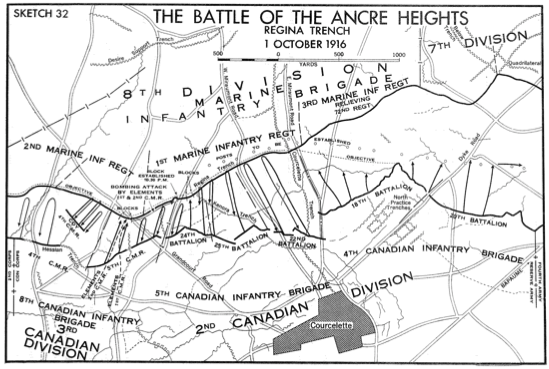 The available material online regarding the 18th Battalion’s involvement is, in a word, sketchy. The War Diary makes a totally oblique reference to the battle:

“The prospects for this attack did not look good and Major-General Turner tried to have General Gough cancel it…While for the most part the attack failed, meeting strong resisteance and being driven back, the 18th and 20th Battalions were able to advance 400 metres on the right flank of the corps’ front and did a new trench to link up with the British 4th Army on its right at Destremont Farm.”

Zero hour was 3:15 on the afternoon of 1 October, and as the Canadians waited in drizzling rain in their advanced positions many were hit by our own shells falling short all along the line. The 8th Brigade attacked obliquely across the Grandcourt road with two battalions of the Canadian Mounted Rifles – the 4th on the left and the 5th on the right. It was the responsibility of one company of the 4th C.M.R. to establish a block in Regina Trench on the extreme left in order to seal off interference from the west That the enemy had been missed by our barrage was evident in the hail of machine-gun bullets which met the C.M.Rs. the moment they mounted the parapet. As had been feared, the uncut German wire proved a formidable obstacle. One company was practically wiped out in no man’s land. Part of another reached its objective, but was there overpowered and perished to the last man. The left forward company of the 5th C.M.R. reached Regina Trench and succeeded in establishing blocks, only to be driven out early next morning by repeated counter-attacks. The other assaulting company was held up by the enemy wire and the blistering machine-gun fire; all but fifteen were either killed or taken prisoner.

The 5th Brigade, attacking on a 1200-yard front which included the two barriers of Kenora Trench and the main Regina position, fared little better. With his strength seriously depleted by earlier battles, Brig.-Gen. A.H. Macdonell was compelled to use three battalions in the assault (from right to left the 22nd, the 25th and the 24th Battalions) and to place the 26th Battalion in support of the 22nd. This left him as brigade reserve only part of the 6th Brigade’s decimated 27th Battalion, which had a company detailed to support each of the 24th and 25th Battalions. The French Canadians had an advance of nearly half a mile to their objective – the portion of Regina Trench between the East and West Miraumont roads. Attacking in three waves, each of eighty men extended at five yards’ interval, they had advanced a quarter of a mile when they ran into an intense German artillery barrage and heavy rifle and machine-gun fire. Then came the bitter realization that the enemy’s wire entanglements were virtually unharmed. “From this moment,” records a regimental account, “the attack failed.” Less than fifty men reached Regina Trench, and these could not be reinforced either from support battalion or brigade. After a sharp fight with bayonet and bomb, all survivors were forced to withdraw to their original trenches.

In the centre the 25th Battalion was charged with capturing “at all costs” the greater part of Kenora Trench and the corresponding section of Regina Trench beyond. “To do this”, reported the CO. later, “I had 200 all ranks and 12 M.Gs., counting the Brigade M.Gs.” He ordered his two leading waves to push on past Kenora Trench directly to the final objective. Enemy fire cut them down, however, and only thirty reached the wire in front of Regina Trench. Finding what protection they might in shell-holes and hastily dug ditches, they waited out the daylight under steady machine-gun fire. Then they fell back to Kenora, which a following company had secured to within 140 yards of the junction with the main position. Before the day ended more than half the attacking force had become casualties.

It was the same bitter story of defeat on the Brigade left, where the 24th Battalion’s objective was some 300 yards of Regina Trench, including the important junction with Kenora. One company gained a footing on the final objective, but with its flank exposed by the 8th Brigade’s failure on the left, it was soon annihilated by strong parties of Marines bombing eastward along the trench. The only bit of success came at the junction of Kenora and Regina Trenches, where men of the 24th Battalion managed to establish and maintain a double block fifty yards wide which prevented the Germans from penetrating the newly won sector of Kenora. Meanwhile north-east of Courcelette the 4th Brigade, adjusting the front line, had advanced some 400 yards under spasmodic machine-gun fire and dug in level with the Fourth Army’s left flank. Early on 2 October Brig.-Gen. Macdonell handed over to the 6th Brigade. The 5th Brigade had gone into the line on 27 September with a trench strength of 1717 all ranks. It came out five days later with 773.

Bad weather prevented further large-scale operations on either army’s front for another week. General Gough left it to General Byng to select his own date for taking Regina Trench, provided this was done and the Canadian Corps in position to attack Pys on 11 October in the opening stages of the proposed three-army offensive. In the meantime Sir Julian handed his left brigade sector over to the 2nd Corps, and on the right the 1st Canadian Division relieved General Turner’s battle-worn formations. Preparations for a renewed effort went steadily forward. Working under fire, and further hampered by rain and mud, the Canadians connected advanced posts to form a new jumping-off line which in places came within 300 yards of Regina Trench. The artillery bombarded the German trenches and wire, but though the wire was cut in many places during the day, by night the enemy would fill the gaps with loose concertina. The objectives given to the Corps were somewhat to the east of those of 1 October. They included nearly two miles of Regina Trench from a point 500 yards west of the Kenora junction, and at its eastern extremity the “Quadrilateral” formed by the intersection of a double row of trenches opposite the Fourth Army’s left flank with the dual trench system of the old German Third or Le Sars Position.72

General Haig assessed the efforts of the Canadians thus:

After lunch I motored to Contay (HQ Canadians) and saw General Byng. He was disappointed that the Canadians had failed to hold the trench which they gained yesterday, and also to occupy another piece of trench which they attacked. I think the cause was that in the hope of saving lives they attacked in too weak numbers. They encountered a brigade of the German Marine Corps recently arrived from Ostend, and had not the numbers to overcome them in a hand-to-hand struggle.
They (the Canadians) have been very extravagant in expending ammu¬nition! This points rather to nervousness and low morale in those companies which are frequently calling for a ‘barrage’ without good cause.

Byng hopes for good results when his 4th Division arrives. The 1st, 2nd and 3rd Canadian Divisions have suffered heavily, and no sufficient drafts have yet joined them. Sir Sam Hughes’ wants the glory of having a Canadian Army in the field, and is forming a 5th division with the reinforcements…

Casualties since 25 September (estimated, the actual casualties are usually less):

This must be considered small judging by the results gained, the number of divisions engaged and the wide area over which fighting is now taking place.