Pte. J. Beasley Was Killed in the Next Big Push

Although the name is not yet in the casualty list, office word has been received that John Beesley, formerly of 1530 and 1544 Danforth avenue and later of 47 Chester avenue, was killed in action on September 29th. Jack Beesley was an Englishman, who came from the Mildands, four and a half years ago. Excepting for a few weeks when he lived in Aurora, he had been an employee of the Consumer’s Gas Company, and lived in the east end of the city. He enlisted in the 83rd Battalion (C) Company, and when he left for overseas in April last, was station at Riverdale Barracks, in England he was drafted to a second contingent unit, with which he was serving at the time of his death. In recently-received letter, he stated with regret that he had not been in in the latest drive, having been on other duties. He has now made the supreme sacrifice. He leaves a family of three children, all boys, under the age of four. The widow and the children are living at 47 Chester avenue. This is the second wife who has been widowed from the same house. 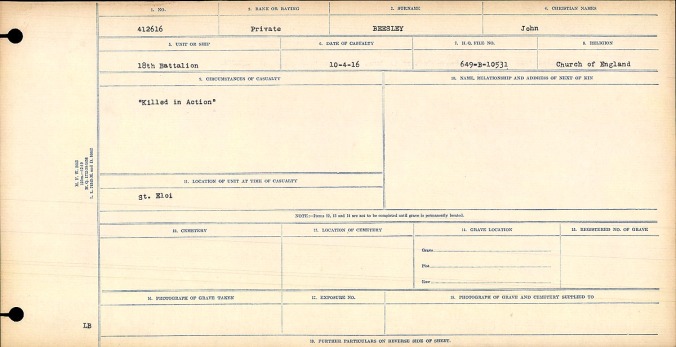