PDF with overview of Aboriginal service in Canadian Forces 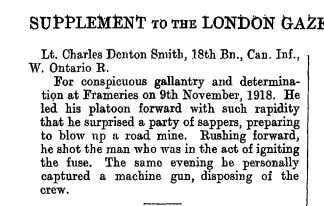 For conspicuous gallantry and determination at  Frameries on 9th November, 1918. He led his platoon forward with such rapidity that he surprised a party of sappers, preparing to move up a road mine. Rushing forward, he shot the man who was in the act of igniting the fuse. The same evening he personally captured a machine gun, disposing of the crew.

Excerpt from above link.