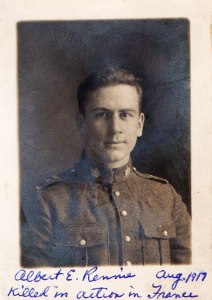 This image was uploaded in 2014 by Mark Forsythe who has the legal right to do so. It may be used for any non-profit purpose as long as the Canadian Great War Project is credited as the source.

“The Memorial Cross (more often referred to as the Silver Cross) was first instituted by Order-in-Council 2374, dated December 1, 1919. It was awarded to mothers and widows (next of kin) of Canadian soldiers who died on active duty or whose death was consequently attributed to such duty.
The crosses were sent automatically to mothers and wives who qualified, and could be worn by the recipients anytime, even though they were not themselves veterans. The cross was engraved with the name, rank and service number of the son or husband.” Veterans Affairs Canada 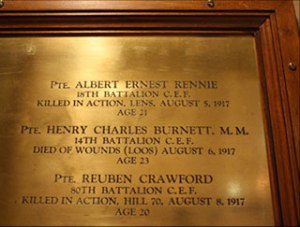 Circumstance of Casualty “Killed in Action”

Summary of Service for Private Albert Ernest Rennie, reg. no. 643944