In the mid-thirties, Bobby Watson and I were strolling along Ouellete Avenue when we noticed a small crowd gathered in front of the vacant lot just south of the Tunnel[ii] entrance. Bobby was in the First Battalion. When we arrived, we found they were watching some workmen erecting a large outdoor sign for the Marley Company.

Most of the carpentry work was completed and the three painters were already on the platform. The one painter was painting a rather wide Blue and Yellow border, while the other two were working on the inner portion of the picture. The one on the left was painting the face of a ruddy-cheek baby who was holding a bottle of milk. It was likely Purity as Purity Dairies had leased the sign board. We watched him for some time and when he came down to replenish his supplies, I immediately recognized him as a former member of the Eighteenth from our days at Queens Park although I did not know him.

I remembered, however, that he was the young man who had done the tattooing on the S.S. Grampian while we were going overseas. I assume there are some former members of the Battalion left with the 18th badge tattooed on their forearm or shoulder as he seemed to be doing a thriving business.

When we arrived in France, he was the one in charge of the Battalion’s little white crosses. When one of our men was killed in action, he would neatly print his Regimental No., Rank and Name on one of the crosses, most of which were erected in the little cemetery at Ridgewood. I always thought that the Eighteenth Battalion crosses were whiter, neater, and more numerous than those of the other Battalions which were in the Fourth Brigade.

Several years later, I mentioned this incident to John Handyside[iii] and he knew exactly who I was talking about. Jim stated that the young man’s name was George (Scottie) Dixon[iv] [Dickson] and he believed he was in our “A” Company.

Mr. Dixon could still be with us as he was quite young when he was with the Battalion. In fact, he could be still painting outdoor signs. He was awfully good at it. 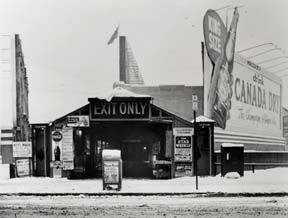 Pedestrian Exit to the Detroit-Windsor Tunnel. Windsor side. Note the large billboard attached to the builing.

From the past the post-war world of Windsor, Ontario comes into relief in this short “memory.” Two veterans of the Great War are walking along Ouellette Avenue and happen upon some workmen erecting and painting a sign. Perhaps this was at the vehicle access to the tunnel or the pedestrian access. Either one would make sense to place a sign as there would be constant traffic into the tunnel and, especially if there were delays for vehicle traffic, a captive audience for the signs as they waited to enter the tunnel. The Detroit-Windsor Tunnel had been opened in 1930 with an official dedication on November 1, 1930 by President Hoover who remotely rang bells from Washington D.C. as part of the ceremony.

Perhaps the deft skill and precision of one of the painters drew the eye of the author to increase his attention upon that painter? Whatever the reason that connection between memory and the present on that day in Windsor was made and the connection was made between two men of the 18th Battalion.

This memory, though short, relates an interesting detail about the life of the soldiers. Tattoos where well represented and documented on the Attestation Papers. A section of the document entitled “Distinctive marks and marks indicating congenital peculiarities or previous disease” allowed the examiner of the soldier to note any items, such as birth marks, scars, vaccination marks and other distinctive marks on the soldier’s body. The range and description of tattoos were legion. For example, one soldier, a Private John Patrick Duggan, reg. no. 766808, had the following description for his tattoos: “Tattoo of Womans [sic] Head on Right Forearm. Cow on Left Forearm.”

It helps create an image of the S.S. Grampian moving inexorably through the Atlantic towards the Battalion’s next stage of its war experience. In the converted berths of the former passenger steamship liner, the soldiers wait out their transit. During the day the soldiers, in platoons, probably drilled and exercised in relays above decks, but a significant amount of time would be whiling away the evening before “lights out” with reading, letter writing, and talking. Private Dickson used his peace-time skills as a sign painter were used to probably make a little money on the side and to help “brand” the soldiers of the 18th with a very visual reminder of the dedication they had for their unit. One can imagine a group of soldiers surrounding Dickson and his customer as he painstakingly created an 18th Battalion crest on their forearm or bicep. Perhaps he did other images to satisfy the needs of his comrades.

Obviously, his skills were recognized in a more another capacity as he painted the crosses marking the graves of the men of the 18th Battalion. Ridge Wood Military Cemetery holds 292 Canadian dead, of which forty-two are members of the 18th Battalion who perished during the Battalions involvement in that sector from Fall 1915 to Spring 1916. Perhaps he painted every single cross and this experience contributed to him suffering from neurasthenia in December 1918.

It would be a morbid task. As he served in his capacity as a soldier with all the incumbent duties and responsibilities he would be called upon, after one of his comrades was killed, to prepare his materials and tools to paint another cross marking the grave of a soldier of the 18th. Perhaps some of these men, like Private James Taggart[v], who was the first soldier to be buried at Ridge Wood had one of Private Dickson’s tattoos on his arm. His service record had no notice of marks or tattoos but is affinity to the Battalion may have motivated him to get one. We will never know but as life move through its arc there are connections like this that may have happened that may have affected Dickson as he went about honouring his comrades with the crosses that “…were whiter, neater, and more numerous than those of the other Battalions…”

Private Dickson did survive the war, but he did not survive until the date that this memory was written. It would appear that he was not involved with the 18th Battalion Association as they were not aware that he had passed on December 12, 1958 at the age of 64-years. During the war he served in “B” Company and he married and upon his demobilization in London his documents show he was to work a sign painter with a company called Glen Brothers Sign Painters in London, Ontario.

The “memory”, with its detail about the soldier that used his artistic skills for profit and to honour the dead of the 18th Battalion touches on one man whose actions had a broader reach. His entrepreneurial drive set up a bit of trade on board ship to supplement his $1.10 per day as a serving soldier overseas with the C.E.F. would earn. His work honouring the men of the 18th Battalion may have been an official task, but I think he did it on his own volition because he created a stronger connection with the men of the 18th while he was tattooing them. Private Dickson got to talk and know his customers from all the companies and when the first fell he wanted to find a way to acknowledge his comrade’s sacrifice.

Those crosses have been replaced at Ridge Wood Military Cemetery by those of Portland stone. Though beautiful, I would have preferred the hand-painted crosses of Private Dickson.

It appears that the documents were written in the early 1970s, a full 50-years after the end of The Great War and are a valuable social history of soldiers’ experiences as told in their own words about the events that happened a half-century ago to them, and now a full century for us. This is the first of the series, and suffice to say, the reference, names, experiences, and strong immediacy of these stories bring the men of the 18th Battalion alive.

[ii] For information about the Detroit-Windsor Tunnel see this link.