MOTHER HAD PRESENTIMENT
In a Dream Mrs. Searle Heard Voice of Wounded Son.

On the day that Pte. Wm. Lyon [Lywnn] Searle landed in England, his mother left for Canada. She had not seen him for four years. Now he is reported missing since April 9 [1917]. On the day he entered Bramshott Camp, his brother, Pte. Morris. [Maurice] A. Searle, left for France. Now Morris is reported wounded. No particulars in either case have reached the mother from Ottawa; possibly they have gone to her former address in England. But in the dead of night two weeks ago. there came an intimation to her, “Come and kiss me, mother,” she heard Morris say; and she has been ever since expecting the ill news which the Star brought her today. Both boys have been in Canada for years. Morris was 18. William 19 years of age. The former worked for the T. Eaton Company, the latter for the Wm. Davies Co. Morris went overseas last August. William went after training in Bermuda with a Lindsay battalion.

Enlisted at the age of 16 1/2 years, December 1915, soin after he went to France with the 18th Battalion, 2nd Canadian Division, 25th of May, 1917, he was wounded at Merricourt on the Lens Front, and was invalided in France for some time. Later he saw action in several capacities and remained in France until December 1918. On New Year’s eve, 1918-19 he returned to England. He returned to Canada, and received his discharge at the Exhibition Grounds, Toronto.

After he was discharged from the army he took advantage of the educational courses provided by the Department of Soldiers Re-establishment. Later he was posted to the accounting department of the Soldiers’ Aid Commission. In 1924 he became assistant supervisor in the Pension Claims Branch. September, 1930, saw another chance in the Pensions Department of Canada, and our Grand Z was appointed Pensions Advocate with the Department of Pensions and National Health. The 1st of September, 1939, saw another change for him by being appointed District Pensions Advocate, a position he still maintains (to quote from The Veterans’ Advocate, a monthly magazine) “and files admirably.” In 1953 the Ontario government honoured him by appointing him a Commissioner of the Soldiers’ Aid Commission of Ontario.

Initiated, Passed, and Raised in Alpha Lodge, No. 384, G.R.C., A.F. & A.M., in 1922, became Worshipful Master in 1938, elected D.D.G.M., Toronto District D, 1950 – 51. Received Honorary Rank as P.M. in Ulster Lodge No. 537, G.R.C. and Remembrance Lodge No 586, G.R.C., Toronto. Exalted in the St. Patrick Chapter No. 145, G.R.C., in 1926 became First Principal, 1942, elected Grand Superintendent 1948, elected to Grand Chapter Executive Executive Committee 1951 – 5, elected Grand J. 1955 – 6, and Grand First Principal, April 25, 1957. he has served Grand Chapter in many ways and at the present time is the representative of the Grand Chapter of Delaware, near the Grand Chapter of Canada. He served Royal Arch Masonry in the Toronto District’s Principal’s Association and was elected President. Past Thrice III. Master of Adoniram Council No. 2, Royal and Select Masters of Ontario, and Past Grand Inspector General; Past Commander Noah Royal Ark Mariners of Ontario, he is a member of Geoffrey de St. Aldemar Preceptory No. 2 Knights Templars, a Kt. Comp. of the Red Cross of Constantine and Appendant Orders.

Other activities: Our Grand Z. in his younger days was one of Canada’s well known soccer football players and was highly rated. Now his chief recreation is golf, being a member of the Islington Golf Club. 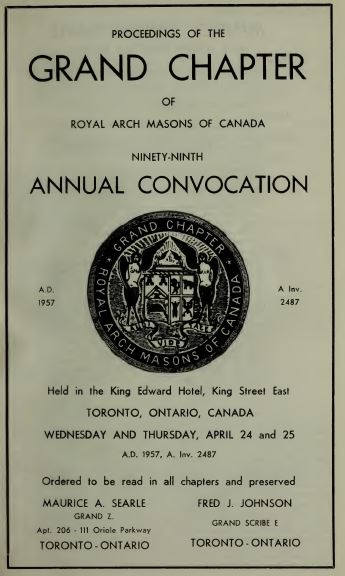