Source: 18th Battalion Nominal Roll, April 1915 during research into how many Americans joined the Battalion.

Born U.S.A. He appears to be associated with Private Hugh Donald Ross, reg. no. 54354 also joined and served in the 18th Battalion.

Note buried at Los Angeles National Cemetry under another iteration of his name. 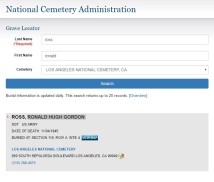