In August 1915 he was associated as a Lieutenant to the 76th Battalion, and went overseas in April 1916. Shortly afterwards he joined the 18th Battalion in France, from which he went later to the 4th Trench Mortar Battery. He served through the battles of the Somme and Vimy Ridge. As he was going round to the comfort of his men he was struck by a piece of flying shrapnel and instantly killed. Buried near Arleux-en-Gobelle.

After surviving the fighting at the Somme and Vimy Ridge Lt. Frederick Charles Peppiatt made the supreme sacrifice on May 3, leaving a widow whom he married before going overseas at No. 2 La Plaza Apartments, Jarvis Street. He was born in Parkdale 26 years ago. After the war broke out, he took out is commission in the 20th Halton Rifles. Joined a Barrie Battalion and was stationed at Collingwood. He went overseas just before Easter of last year, spent two months in England and reached France on July 1st with a trench mortar battery. Save for a brief holiday last Christmas, he remained in the trenches from the day he landed at the front to the time of his death. After Vimy Mrs. Peppiatt received a cable with the magic word “safe” and that was the last word she received from her husband. Three brothers, Joseph, Edward and Phillip reside in Toronto and a fort, William, lives at Hamilton. His mother is at Glencampbell Pa. Three nephews are in France. 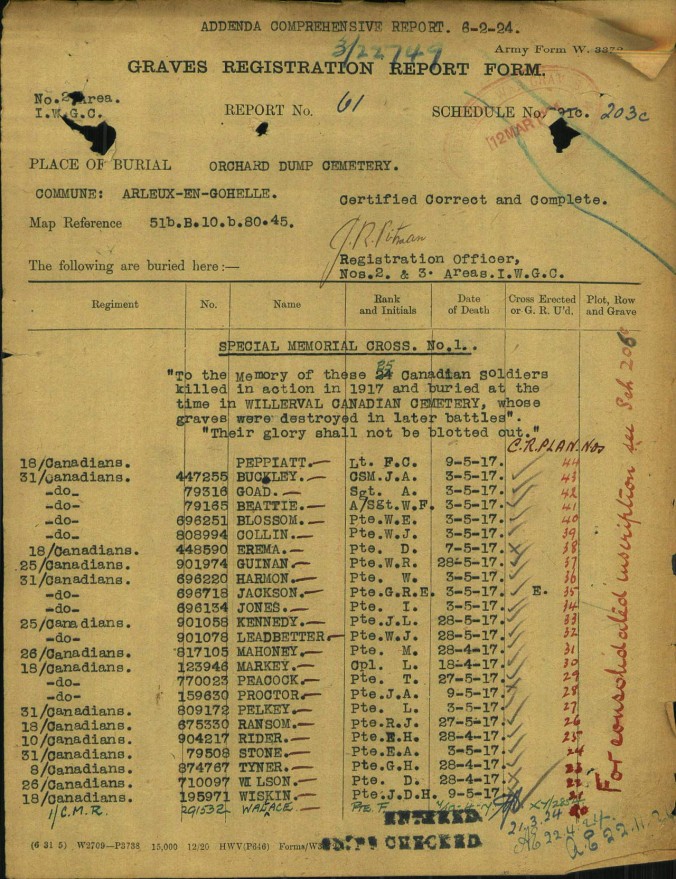