Source: Letter from Captain Gray to his mother.

Originally served with the 18th Battalion.

Letter from James Roy Gray, with the 18th Battalion C.E.F., to his mother, Margaret (Westland) Gray dated May 20, 1916 from somewhere in Belgium.

It is a beautiful day and quite quiet. I almost thought this morning that peace must have been signed or an armistice called. No shells, no rifle or machine gun fire, no aeroplanes. One is up now though and a few snipers are working. There goes a shell, one of Heinie’s, way over. Another, some place. The birds are singing quite cheerfully. More shells, all Heinie’s. He must be after a battery. I can hear our own guns firing, but they are not coming this way. Two wompers are in sight. I wish you could hear the different birdcalls and I wish too, that I could distinguish them. I hear a garage truck moving. Seems to be over across the line, but I can’t tell, the sound is so faint. Another wompers. I heard a cuckoo this morning early. It’s about 6 o’clock now, but the day breaks about 2:30. At that time I could see the German front line. Daren’t look now, though. In fact we hardly dare move here during the day. Another womper. Two of us are here with gun, ammunition, tripod, belt, filler and other paraphernalia, under two badly battered pieces of corrugated iron and a couple of trench mats, the latter covered with sand bags. Hope it doesn’t rain. It does look a little hazy though and there is a cool breeze blowing. That last womper was close. Shells going over to Fritzie. Sound leisurely, must be fairly large, 4.5’s likely. I can’t hear them burst. I heard that one, though. Sounds like Heinie’s, in our front line. Two whizzbangs for Fritzi’s front line. Two more, one died. Two more. Heinie’s wompers, our whizzbangs. There must be a reason for that, but it’s hard for the infantry to see it. I fully appreciate their attitude too. It isn’t much satisfaction when a big chap is pelting you with firecrackers to know that your big brother is shooting squibs at his little brother.

Some hours later. It’s over, thank God. Only lasted about five minutes. The first was the closest. I didn’t count them, but I think there were about 10 or 15. I’m not sure whether they were wompers or wooly bears, but I think they were the former. You should have seen us crouched under the trench mats. Some protection anyway. There is one advantage about a position like this. If they do smash it up, at least there is less chance of being buried alive. A strong position smashed up would be a death trap. There is one objection to this position though, besides the discomfort. If anything happened to us here no one would know it until night or if they did, they couldn’t reach us. However, I think this is our last day here. Stewart and Buckley relieve us tonight, and I expect the 6th with take over tomorrow night. Hope so, anyway. We’re supposed to be out resting now, but had to come in here to assist the 5th.

At it again. I wish they’d leave us alone. They have shaken this place two or three times and shrapnel has been falling on the roof. My pen is shaky. Seven so far. Hope it’s the bunch. I think it is. Fritz is getting his too. Here’s Heinie over to see the result of his shelling. He didn’t get much. Well, I like to see him waste them, but wish he’d waste them farther away.

Thanks for your parcels and thank Aunt Lily for the socks. Don’t understand what you mean about the tin boxes. It’s the only way. Any other way and the stuff comes crushed.

Love to grandma and all. I want to write the Rene.

Another letter when he was in the Tank Corp:

Prelude to the above letter in the London Free Press:

For the past seven months Lieutenant Gray has been in the most exciting branch of the Imperial service, the Tanks, commanding one of the land battleships, which have struck terror into German hearts by their uncanny abilities to break through all obstacles. His service has been exciting but, as he says himself, it will be a closed book until after the war, the military rules of silence interposing a solid wall between the stories which Lieut. Gray promises to reveal and what can be said in letters.

Service of a year in the Ypes salient stands to the credit of Lieut. Gray. He enlisted here with the 18th Battalion, and went overseas with the famous fighting unit. After promotions to non-coms rank in the 18th he was offered, and accepted, a commission in the Imperial service, and then volunteered for the “tanks” service. That was seven months ago. He is still commanding a “boat”

I know it is ages since I wrote to you, but conditions have not been of the best. And, well I have been over the wall twice since I wrote last. Of course nothing can be said about such things now, but when I come home I shall tell you the story of a roll of friction tape, also of other things.

You want to know where I am and with whom, but of course it is impossible to give you even a rough idea, as we are G.H.Q. troops, and may be used anywhere. In fact, in the last seven months we have been practically from end to end of the line.

I have not had any mail for two weeks. I must now give up hope of one batch of mail, as it is evident another has gone down. It is disappointing very.  Despite even greater disappointments and tragedies, though I see friend after friend go west to the land of eternal peace, among the most recent being two who were entitled to wear the 1914 ribbon, though I do not know when my time may come, remembering the story of the pitcher which went too often to the fountain, the will is still to carry on, for unless we carry through our enterprise to triumphant issue then Leslie, Mervyn and the growing lads of today will have to don, in their turn, the uniform of the King and became the soldiers of tomorrow.

My New Year’s wish then to you and daddie, to all my relations and friends, and to all engaged with us in our great task, is that you may all receive the grace of fortitude to withstand trouble and to carry on cheerfully till victory is ours. We, over here, know that you at home are bearing the heaviest burdens of sorrow and suspense, and we wish you to be happy, as we are, who live from one day to the next, and throw care to the winds.

At present, and for some time to come, we are fairly comfortable and perfectly safe, and are enjoying the Christmas season to the best of our ability. I am in a rough cubicle for two, in a large wooden hut, with an improvised stove, table, beds, seats, washstand, and cupboards. My roommate has just left me for a few weeks so I occupy the mansion alone.

Later he was to receive the Military Cross for his actions as a tank commander:

For great gallantry and good work on 24th Oct. 1918 North-East of Bousies. He went into action with his Tank and knocked out machine-gun emplacements, thus enabling the infantry to advance without casualties. Later he ran into a nest of machine-guns, the Tank being riddled with armour-piercing bullets, wounding four of his gunners and his driver. He promptly drove the Tank himself, and although his guns were out of commission, he succeeded in putting out the nest of machine-guns by running over them and dispersing their crews. 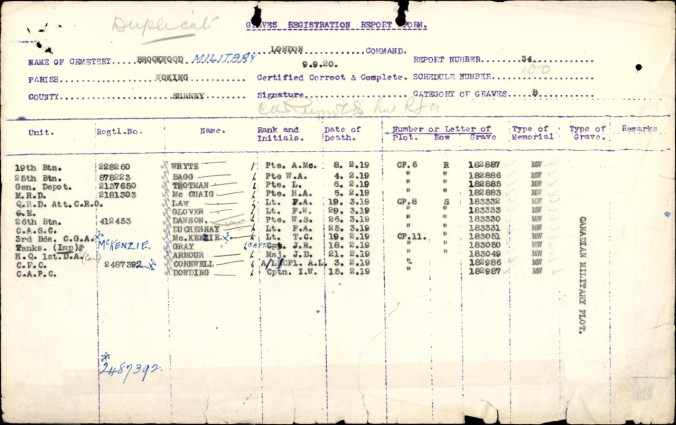 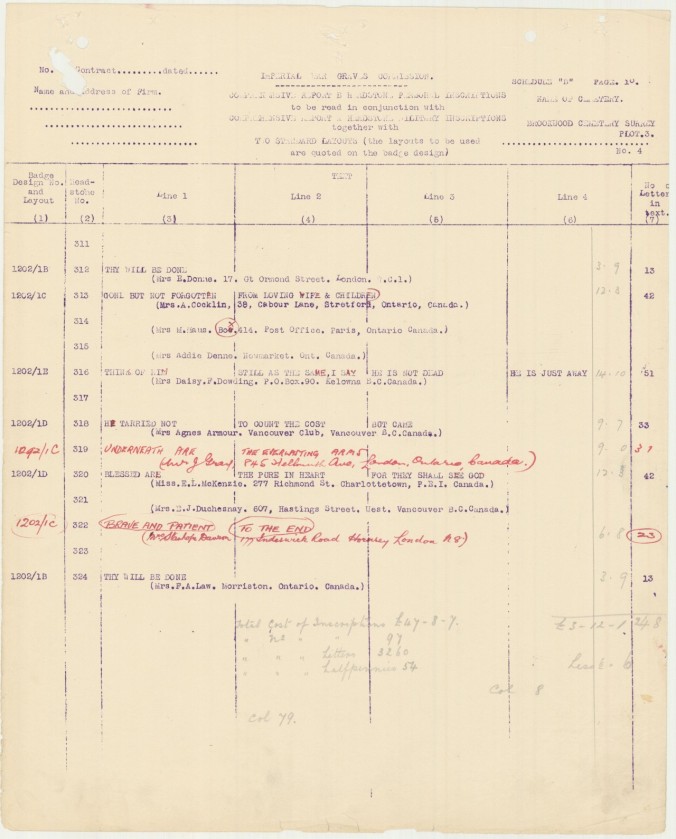 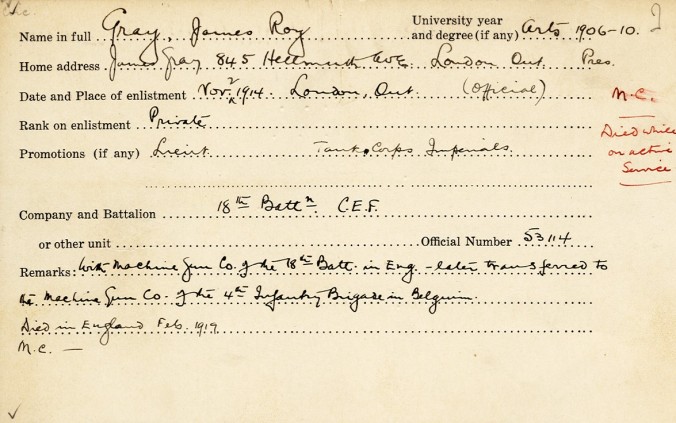