Every time we meet Harold Aikenhead[ii], the general and competent Secretary of our London Branch, it always brings back memories of our first or second trip into the Front Line. I don’t recall where it was but Harold claims it was B & C trenches and he should know.

It was a very quiet part of the Front as the lines were far apart and the only thing you had to worry about was the occasional shelling, which didn’t occur often. About thirty yards behind the Front Line there was a reserve trench, which was narrow and not too long. Some of us were of the opinion that it had been specially built for the machine guns or mortars. At the far end some had left an obsolete bombing machine, which worked on the same principle as a slingshot. You set the dial on the left, placed the bomb in the pocket, and pulled evenly on two handles which were attached to some heavy springs. The farther down you pulled the handles, the more distance you got with the bombs.

On a monotonous afternoon some of the younger set decided to try it out and, as there were no bombs available, they decided to make their own by filling some jam tins with stones, shrapnel, mud, or anything they could find. They then repaired to the trench and took turns at working the rusty machine. Everything went fine. The dial was set to sixty yards, and the jam tins left the pocket nicely, arched over our front line and landed in no man’s land. Butch Crammond [Cramond[iii]] had to be different. He changed the dial and pulled the handles back with a jerky motion. His jam tin left the pocket in a hurry and seemed to go higher than all the others, but didn’t travel quite so far. In fact, it only travelled as far as our own front line and when it came down it landed on poor Harold’s noggin almost knocking him cold. He still carries the scar. We were all sorry, Butch more so than the rest of us, as Harold was one of the best-liked in the Platoon and one of the most obliging. He later proved this when he became Steward of the little “Y” at Vierstraat.

Harold and I were discussing the incident some time ago and we believed that six or seven took part in the experiment. The accident happened in late September (1915) and by the following spring, at least three of those involved (Carthy[iv], Drinkwater[v], & Lee[vi]) had been killed in action and two others including Jimmy Cork[vii] had been so severely wounded they never returned to the Battalion. The turnover of Officers and Men in all the Infantry Battalions was tremendous. That was why there were nearly three thousand replacements set to the Eighteenth Battalion During hostilities.

The 18th Battalion was blooded in Belgium at the end of September 1915. It was serving in the line near Vierstraat where it would begin to experience combat for the first time. It may have been a deliberate assignment for the battalions of the 4th Canadian Infantry Brigade to be placed in “…a very quiet part of the Front…” but, as is borne out by the War Diaries of the Fall of 1915, the Battalion began to suffer casualties and deaths from their exposure to this environment.

The use of grenade catapults by Imperial Forces was only one of many tools used to overcome the tactical challenges trench warfare offered. These catapults offered a relatively inexpensive, accessible, and local solution to increasing the firepower of the soldiers in the front lines. Some of the models available for use were of British design, such as the Leach Trench Catapult, the West Spring Gun, and the French Sauterelle Grenade Launcher, where used to launch grenades across the lines towards the Germans in order to damage trenches. The accuracy of these devices would not be wholly practical to offer consistent results, but the grenades exploding in and around the trenches would have some value as a weapon of nuisance and to interdict the activities (sleep, trench maintenance) of the enemy. In addition, the British pre-occupation with percussion grenades, as opposed to using grenades with timers, would have been well suited for grenade launchers.

From the description given by the author it is very likely that the device being used may have been a Leach Trench Catapult. The Leach Catapult used a rotating two-handed winch to put tension on the springs to fire the device and the description of the catapult by the author indicates using “two handles” to pull evenly back to load the springs that would fire the projectile. Thus, the interpretation of pulling on the two handles may relate to the cranking of the two handles projecting on either side of the catapult. Sixty-five years had transpired since the incident and if the description of the device was second-hand this could account for the apparent inconsistency about how the device worked.

The incident is verified by the Medical Officer’s War Diary which relates on October 3, 1915 that: “No. 5416 H. R. AIKENHEAD was hit in head with bully beef tin which someone was using to test a trench catapult [illegible] was sent to 5 F.A.” This incident is reflected in private Aikenhead’s service record as he did attend No. 5 Canadian Field Ambulance with a “head wound, accidental” on that date and released back to duty the following day. Private Aikenhead was one of the Battalion originals that served with the 18th until December 1917 where he was assigned to the Canadian Corps Reinforcement Camp with the Department of Military Services. Y.M.C.A. continuing his previous experience at Vierstraat helping the soldiers through the auspices of the “Y”.

Private Alexander “Butch” Vincent Cramond survived the war. Apparently, his transgression did not reflect on his military service with the C.E.F. as he rose to the rank of corporal and was eventually assigned to an Officers Training Course in May of 1917 where he became a temporary lieutenant and was returned to the 18th Battalion at that rank on October 4, 1917 just before the hell of Passchendaele. He lived until November 5, 1957, dying at the age of 64 years old and is buried at Mountainview Cemetery in Cambridge, Ontario. He was a resident of Galt, Ontario and joined the 18th Battalion in October 1914. 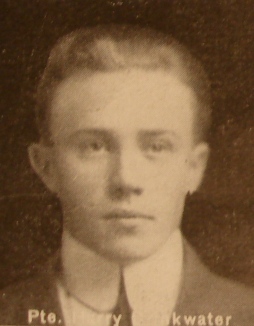 The other soldiers mentioned in the story share some characteristics. Private Aikenhead enlisted at Galt, Ontario, as did Privates Carthy, Drinkwater, and Lee. Carthy was the youngest at 18-years of age with his companion Drinkwater and Lee being a relatively “old” 20-years of age. Cramond was 21-years old when he enlisted. Private Cork, who was transferred from the 33rd Battalion just before the Battalion left for England at the middle of April, was from London, Ontario and 19-years old. The appellation applied to these soldiers as the “younger set” was apt. They were young. And Carthy, Drinkwater, and Lee would die young as well. Private Eric Carthy was to perish in the Vierstraat Sector, apparently from German machine gun fire, on Boxing Day, 1915. Next to perish of this group was Private Harry Drinkwater who was struck by a shell on April 25, 1916 and died that day of his wounds. He was, then, only 22-years old. Last to die of the “younger set” was Private John Lee who was killed, along with many other 18th Battalion men, during the attack at Flers-Courcelette on September 15, 1916 at the Somme. Private Cork was, relatively, lucky. He was wounded but his right elbow was so badly shattered he required an amputation. Hard for a farmer to suffer such a wound. He returned to Canada in October 1916 and was discharged where he was granted a pension at 60% disability for one-year worth $208.00[viii].

The memory of the 18th Battalion “younger set” experimenting with the trench catapult is replete with interesting details and nuance. The reference to a weapon system that was adapted to the conditions of trench warfare and the use of tins and other projectiles reflects to the grenade shortage the Imperial Forces experienced at the start of the war and into the end of 1915. Though the tins fashioned by the soldiers of the 18th probably did not have any explosive one wonders what the opposing German soldiers thought as these tins full of “anything they could find” were shot into the air. They also must of wondered why these projectiles only landed in No Man’s Land. Perhaps the “younger set” did not want to provoke a response from the Germans or they miscalculated the range and capability of this “obsolete bombing machine”. Private Cramond certainly did. His actions led to the injury of a fellow member of his unit. One would suppose that upon his return Private Aikenhead reminded Cramond of his lack of martial skills with the catapult without mercy. If not, one can imagine the rest of the men in Cramond’s platoon would talk of this event for some time and the news must have travelled through the Battalion grapevine with some alacrity.

One also wonders if this activity had the direct approval of an officer? Such actions, such as shooting objects towards the enemy, was certainly to be of some concern to the platoon sergeant and officer as this activity could be considered aggressive and warrant a response by the Germans, perhaps by artillery, which would be unwanted, especially from actions not condoned by a higher authority. Yet, other than Aikenhead’s aching head, there appear to be no repercussions from the Germans or from a higher authority in the 18th Battalion.

Its akin to teenagers making with a prank. Something goes wrong. They stop. And all is forgiven and blamed on youthful exuberance.

But in a combat zone the outcomes could have been much worse. On October 3, 1915 some young men pushed the limits and an accident probably stopped them before something more serious occurred.

It appears that the documents were written in the early 1970s, a full 50-years after the end of The Great War and are a valuable social history of soldiers’ experiences as told in their own words about the events that happened a half-century ago to them, and now a full century for us. This is the first of the series, and suffice to say, the reference, names, experiences, and strong immediacy of these stories bring the men of the 18th Battalion alive.

[vi] Lee, John:  Service no. 53934. There are several soldiers serving with the surname Lee but Private Lee, reg. no. 53934 appears to be the only Lee to have perished with the 18th Battalion and his service record details are consistent with the details of the story.

[vii] Cork, James William:  Service no. 54310. Most likely. Name and wounding consistent with detail in story.