Major C.C. Gwyn, on of the most popular and efficient of Officers was killed by a M.G. bullet, about 100 yards from the objective and Lieut. W.J. McLean was also killed while leading his men across “No-man’s-land”. After the death of Major Gwyn, Lieut. P. Jerdan assumed Command of “B” Company. 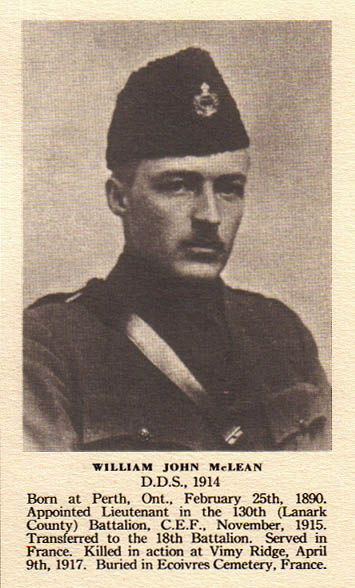 Photo of William John McLean and his wife. Source: CVWM

1.         Photo accompanies this of Lt. William John McLean, who was killed in action in France last week and a telegram reached Perth Thursday evening of last week stating briefly to his father David McLean of Drummond that his son had officially been reported killed in action on the 9th April.  Lt. McLean had been in France seven months and is thought to have been killed in the Vimy Ridge battle on the 9th April.  He was one among the man Canadians who fell in that glorious advance and paid the supreme sacrifice.  Lt. McLean’s death was heard of with deep regret by all here.  He enlisted with the 130th in Perth in the winter of 1916 and went overseas with the battalion in September of last year.  He was in England but two weeks when in company with Lt. Joseph McAmmond, formerly of Montreal and Lt. John Watt, formerly of Peterboro and who were with the 130th; he was drafted into another battalion and went immediately to France and has been engaged quite regularly in the trenches since September last.  Lt. McLean was 26 years old and was practicing dentistry in Toronto up to a year previous to joining the 130th.  He took his degree at McGill in Montreal and a post graduate course at Toronto.  In September he married Marguerite Wilson, son of A.T. Wilson of Toronto who is now residing in Toronto.  Lt. McLean is survived by his wife, father, two brothers, Ray and Thomas at home and by two sisters Isobel and Marguerite in New York.  In the last letter received from him dated 8 March, Lt. McLean gave the impression that some big work was ahead of them.  The activity in the air where they were located was more than usual while Fritz was retiring at the Somme and Bapaume was in their hands.  Concluding he said:  “we have a hot place now and there is something doing all the time.  I brought my platoon out the other night under heavy fire but was lucky—losing no one.  The officer who took over from me was killed just a few minutes after I left him.  The day before I came out I was buried by a Heinie shell but escaped any serious injury.  Just got a shaking up.  Our barrage fire is very heavy at times and the noise is terrible”. 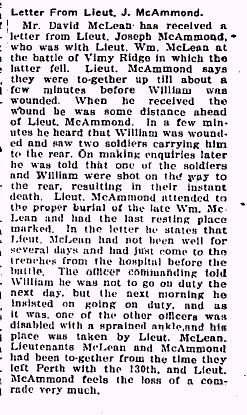 Newspaper Clipping – From the Perth Courier for 18 May 1917. Source: CVWM

The following letter was received by Mr. David McLean from Lieut. Joseph McAmmond in regard to the burial of the late Lieut. Wm. McLean:

I also has a special funeral service for him by Rev. C.K. Whalley of the 3rd Division Canadian Artillery.

As information, I may say the he was killed on the morning of the 9th of April. I understood at first report he was only wounded, and as it was impossible to leave your post during an advance, I was unable to get much information until our unit was relieved. At the first possible opportunity I made enquiries [sic] and found the burial party had already buried him in the field of battle and had him nicely fixed up. As soon as I got the location and went to our C.O. and got permission to have him re-interred in the Military Cemetery, which I did yesterday, April 30th.

I may say I can hardly tell you exactly how he met his death, as I saw two slight wounds on him, and our M.O. says it was concussion, which I was led to believe was the case. He looked quite natural and peaceful in death and I don’t think he suffered any pain.

I am trying to get a photo taken of the grave when it is finished up, and forwarded [sic] to you. Any other information you wish I will gladly obtain.

Letter published in the Perth Courier for 23 February 1917. Source: CVWM

IN THE MIDST OF THE CONFLICT

Lieut. Wm. McLean Writes of His Experiences in France.

The following letter was received recently from Lieut. Wm. McLean by his father, Mr David McLean. Lieut. McLean went overseas with the 130th Battalion and has been in France in the think of the conflict for some time:

I must write this evening for I may not have a chance again for some time. We came out of the line today after a month’s stay. We had it very hard in the line for the weather was very bad most of the time. We had a couple of trips out of the trenches, but just long enough to have a night’s sleep and a bath. The trenches were in very bad shape and it was nearly impossible to sleep, except when were were almost ready to drop. Bad and all as our trenches were they had nothing on the German trenches. Some of the recent prisoners seemed to think our trenches were fine. Just before we came out we some some real fighting and things were warm for 2 day[s] or so. Quite a bunch of prisoners were taken. Most of them were quite young chaps and were apparently quite glad to be taken. Our boys were in a hurry and blew up many dugouts that were full of Germans and in all probability cause many casualties.

Since I started this letter things have happened. They were shelling while I was writing and a big one almost put us out of business. A fragment came through the door and knocked things about a bit. No one was hurt but we were busy for awhile and most of the time on the move.

We are now away from the line, almost out of hearing of the guns, and run a good chance here of living to a ripe old age if we are here long enough. We marched out in full heavy marching order. It was quite a hike with a seventy-five pound pack, but the weather is cold now and did not mind it much. I expect we will be here for almost a month and probably into some ‘show.’ We are billeted in a little town. The billets are not very good, but i was luck and got a good bed. So once more I can get my clothes off. For over a month I never took off my boots except to change my socks or wash.

The weather here now is very much like early winter weather in Canada. There is a little snow but scarcely any frost in the ground and it i is just cold enough to keep the snow from melting. I had a letter from Aunt Minnie the other day and a parcel with some maple sugar which was fine. We had it on our porridge while it lasted. Well, dad, news is scarce and I must write some more letters to-night.

Give my love to all, 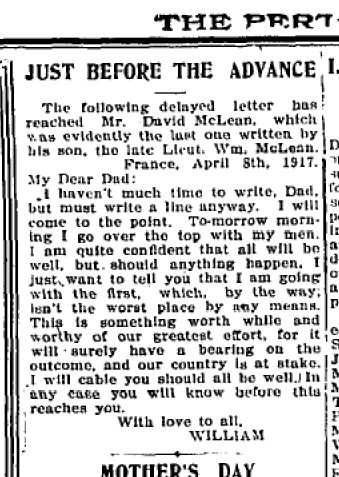 Last letter to his father, published in the Perth Courier for 18 May 1917. Source: CVWM

JUST BEFORE THE ADVANCE

The following delayed letter has reached Mr. David McLean, which was evidently the last one written by his son, the late Lieut. Wm. McLean.

I haven’t much time to write, Dad., but must write a line anyway. I will come to the point. To-morrow morning I go over the top with my men. I am quite confident that all will be well, but should anything happen, I just want to tell you that I am going with the first, which, bu the way, isn’t the worst place by any means. This is something worth while and worthy of our greatest effort, for it will surely have a bearing on the outcome and our country is at stake. I will cable you should all be well. In any case you will know before this reaches you.

With love to all,

McLean, Lieut. W.J. – During the fighting in front of Vimy in April, Lieut. William John McLean, Dent. ’14, who was serving with an Eastern Ontario Battalion, was killed in action. Lieut. McLean came from Perth, Ont., where he was born on February 25, 1890, and in 1908 entered the Department of Dentistry at McGill, from which he graduated in 1914 with a degree of D.D.S. He was the son of David McLean, Perth.

“Killed in Action” Killed by machine gun fire during the advance on, and capture of Vimy Ridge. 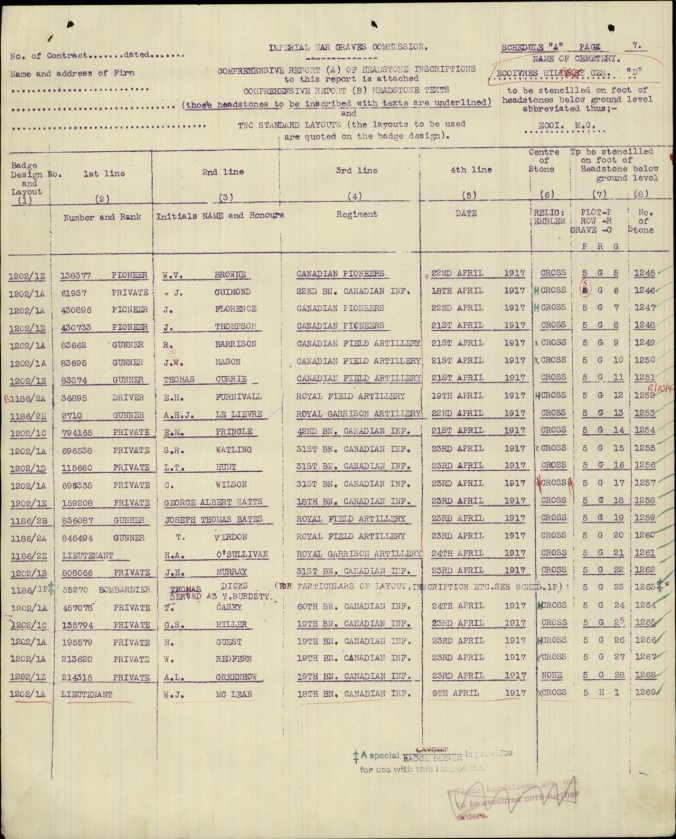