German A7V disabled by trench. Apparently captured by New Zealand forces in the Iwuy area during the action of October 11, 1918.

Iwuy is a small commune in France, South East of Vimy and North East of Cambria. On October 11, 1918 the 18th Battalion was involved in an operation where they were able to repulse 3 German tanks. This action has the significance of being the last action in World War 1 were the Germans used the A7V tank.

The German Army had adapted their interpretation the British innovation of the tank into the large, lumbering A7V. This 11 foot high. 33 tonne tank carried a crew of 18 with 6 machine guns and 1 5.7 cm cannon were built in very small numbers and saw limited tactical use. Given their size; lack of hardened armour plate; lack of maneuverability their utilization in the battlefield generally was not very successful.

It was during this action that Captain William James Baxter earned the Military Cross.

The War Diary’s reference to the action on October 11, 1918 with the German tanks is as follows:

At 09:00 hrs. the Battalion in support to the 20th. and 21st. Battalions advanced from the trenches in T.10.b. and T.11.a. & b. “C” and “D” Companies on right and left front respectively with “B” Co’y. in support and “A” Co’y. in Reserve. Battn. Hdqrs. was located in the cellar of a farm house at T.12.a.90.10. about 09:30 hrs. The two front line Battalions swung over too far to the left and “C” Company when [their] line was threatened by enemy tanks took up a position in 0.31.c. turning back three enemy tanks by concentrated rifle, Lewis Gun, Machine Gun fire, turning five enemy M.G.s around for this purpose. The front line battalions being driven back by the enemy tanks on the left and the Imperial Brigade on the right also withdrawing. “C” Company then dropped back to the support position in U.1.c., then immediately advancing in conjunction with “B” Company to sunken road in T.6.b. and U.1.a. forming a line there with the 20th and 21st Battalions and a few men of the Yorks Regt. who had swung over on our area. At 15:30 hrs. “C” and “D” Co.ys. attached to the 21st. Battn. advanced under an Artillery Barrage to N.30.d. & O.25.c. & b. but the Imperials on the right not getting forward the troops were drawn back to for a line through N.36.d. & O.31.c. & d. (in which position they were relieved by Units of the 51st. Division). We were notified that the Battalion would be relieved by Units of the 51st. Division. Relief was complete at 23:00 hrs. “C” & “D” Companies were relieved by the Gordons and “A” & “B” Co’ys. by the Seaforth Highlanders. Upon relief the companies moved independently to billets in SCAUDO EUVRES. During the day’s operations, Capt. W.J. Baxter and Lieut T.V. Mildford and 54 O.R.s were wounded. 11 O.R.s were killed in action and 18 O.R.s were wounded-gassed…

This précis of the actions of that day encapsulate a significant historical military action in regard to the use of the innovative weapon system – the tank. This was the last action in which the German A7V tanks were used.

From this War Diary entry it is apparent the German tanks caused initial havoc with the British and Canadian action.

The 20th and 21st Battalions swung too far to the left, the reason is not stated in the 18th Battalion’s War Diary but it appears that the German tanks, which most probably were not supported by German infantry troops, had an opportunity to cut off these two battalions from their line of communication, resupply and retreat. It is not clear to which Company the War Diary refers to as there is some confusion between the text of the War Diary and that of the Military Cross citation. The War Diary states that “B” Company was in support but the War Diary states the “C” Company was in action against the tanks. Given the brevity of the War Diary entry the confusion could be cleared up by the fact the 18th Battalion was in “support” of the 20th and 21st Battalion’s counter-attack at Iwuy so any action by the 18th was in “support” of the counter-attack. The earlier War Diary reference was specific to the actions of the 18th Battalion and not the larger action of the counter-attack. It is not helpful that the War Diary entry is covering such a long and complex action. 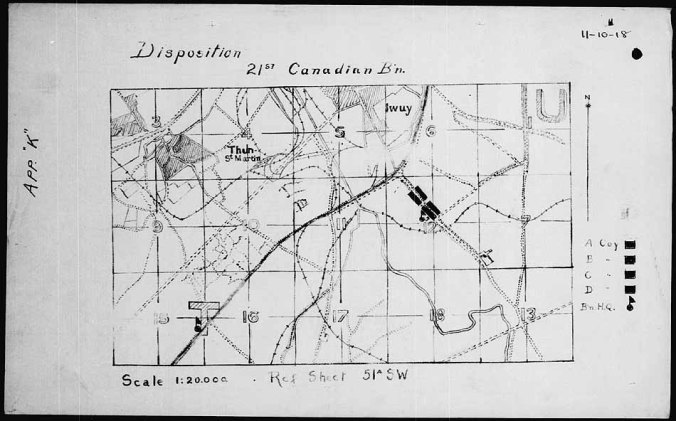 German source showing the action of the A7V tanks on October 11, 1918. From the map above the “T” intersection of the roads just South of Iwuy comply with the 21st Battalion’s disposition map.

During the action Captain Baxter earned the Military Cross and was wounded. His wound appear to consist of a gunshot wound to the face and left wrist with was further complicated by foreign objects being lodge in his face near his eye socket. He also lost two upper incisors.

For conspicuous gallantry and devotion to duty in front of Iwuy on 11th October, 1918, when in command of a support company. The enemy, having counter-attacked with tanks, brought our attack to a standstill. He pushed forward with his company, and having use of all his Lewis guns and three captured machine guns, was able to force the tanks to retire, thereby enabling the position to be held, and the advance to continue later. His courage and determination were worthy of high praise.

Note that the citation records 3 German machine guns, which is at odds of the War Diary’s record of 5.

It would be fascinating to have a German account of this action but given the terrain typically found in the front lines of these areas of action with the many shell holes, trenches, and other geographic features the effectiveness of the German AV7 tanks was limited in their maneuverability. This was most likely further compounded by the configuration of the armour these tanks being only able to withstand rifle and machine gun fire, which prevented them from having a decisive impact on the battle space. It also appears that the tanks were operating with limited or no German infantry support since the war diaries make no mention of German infantry involvement. Without coordinated infantry support the German tanks would have been exposed to Allied infantry attacks.

The German military lagged in armoured doctrine in the First World War but would later take these lessons and develop new tactics for tank and infantry operations combined with air power which became the “Blitzkrieg” doctrine.

It would be valuable to review the war diaries of the adjoining battalions to gain more insight into the action. Observe the image below in more detail. The spacing between the gun-shield of the main armament (5.7-cm Maxim-Nordenfelt) gun and the embrasure for this gun appears quite large. Perhaps concentrated fire from machine-guns allowed bullets to enter the tank with the resultant chaos of ricocheting projectiles inside the subject tanks caused them to be overcome.