Source:  Remembering the Great War by the WR Record

Born to North Shields couple James and Margaret Stewart in February 1877, James was one of their seven children born and raised in Hartlepool. At the age of 14 James was working as a draper’s shop boy. On his marriage to Janet Hepburn in 1899 he was a machinist at the local marine engine works. Janet died three years later and in September 1906 James married Aleathea Fennelly (or Finlay) in Holy Trinity Church, Hartlepool. She too died and six months after her death James left for Canada.

Sailing from Liverpool on board the SS Corsican, James arrived on 23 May 1908 and found work as a machinist in Ontario. On 23 October 1914 he enlisted in the 18th (Western Ontario) Battalion in Galt, Ontario, becoming Private 53970 in “D” Company. After winter training the 18th Battalion sailed from Halifax to Avonmouth, arriving at the end of April 1915. The men were posted to West Sandling Camp until September when they proceeded to France as part of the 4th Infantry Brigade, 2nd Canadian Division. After leaving Folkestone their ship was accidently rammed by a Royal Navy destroyer and had to be towed into harbour at Boulogne.

James was treated for shell shock in June 1916, possibly brought on by the massive artillery bombardments fired by the Germans during the Battle for Mount Sorrel. He was away from the battalion for just one week, rejoining them at Dickebusch.

He was wounded during the attack east of Pozieres, the Somme on either 14 or 15 September 1916 and was evacuated to the 44th Casualty Clearing Station, where he died from his wounds just over ten days later. He is buried at Puchevillers British Cemetery. 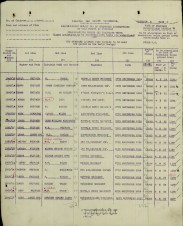