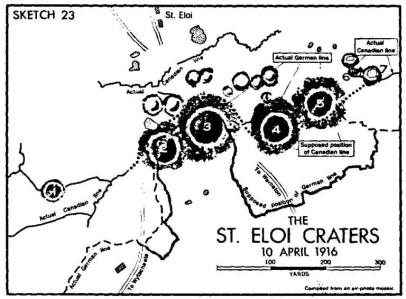 The Battle at St. Eloi Craters was not well documented by the 18th Battalion’s War Diary. The Diary skips over its involvement in the briefest of detail, and even the appendices offer little detailed insight into the action. This was an important action for the Battalion and the other members battalions of the 2nd Division as it was this Division’s first taste of large-scale action, as opposed to the static, line holding operations from the Division’s arrival on the Continent in September 1915 and assignment to the Flanders sector. The outcome of the action led to many battalions having their commanding officers replaced – the 18th Battalion was no exception – for the perceived poor showing of the units engaged. Regardless of “blame,” the actions at St. Eloi was not the finest hour of the Canadian Expeditionary Forces.

The fault did not lay entirely with the officers and men of the battalions at the sharp end. For example, on April 6, 1916 the 31st Battalion C.E.F. suffered a 17-hour continuous artillery barrage. The Germans were determined to not lose control of the area and the intensity of the shelling made the morass of the mud and craters more confusing for the units attempting tactical operations during this action. This “drumfire” was noted in their war diary and the artillery action by German forces has been claimed to be the most intensive of the war on the Western Front.

There have been not many eye witness accounts of this action from the 18th Battalion perspective. Private William J. Barrett, late of London, Ontario was a soldier and, in peacetime, a journalist, so he was a natural conduit to share the experiences of the Battalion. In this case he shares the experiences of the fighting at St. Eloi combined with the heroism of a soldier he admires very much in a letter published in the London Advertiser[i]:

“But it was the at the Battle of St. Eloi[ii], where Drinkwater distinguished himself most, when the terrific struggle for the crater was in progress. It was a night long to be remembered by those whose mission it was to add further honor and glory to the good old Union Jack.

About an hour after midnight, the Canadians set out on their difficult task. From the German line flare after flare went up to search for attacking parties. The deadly machine guns of the enemy occasionally swept the battlefield , and a few shells would whistle through the air and burst with a thunderous roar. But the boys pressed onward to their goal.

Now the hellish sounds of crashing bombs rent the air. Fritz was getting his iron rations. Then it was hell let loose. The enemy opened up this artillery, and huge shells raced through space, high explosives and shrapnel burst among the Canadians. The sky was now lit up with hundreds of flares of many colors. Our artillery was more than equal to the Germans and the guns poured forth murderous volleys. While the battle was at its highest, young Drinkwater, who was in the think of the hellish destruction, was called upon as guide for an officer. From place to place he led the way unflinchingly. The shells falling all around and the very earth quivering from the might explosions. Yet he accomplished his heroic task. Then again he went back to the crater, and this time he volunteered to bring in one of our bombing parties just before daybreak. Again he was successful, bringing back every man safely. It was, indeed, a plucky daring deed, and the hero came through unhurt.”

Bartlett describes in some detail the environment in which the 18th fought. He also shares some of the specific actions that Drinkwater does to earn his praise.

It is not until later, in another letter, this time from the officer mentioned above, to the mother of the not deceased Private Drinkwater that we learn of the identity of the officer:

“He was a very brave young man, and acted as a guide for me one night in a grenade attack.[iii] Not the least sign of fear did he give, but was joking all the time, even when the metal was flying like a snowstorm.”

The letter was written by Captain Samuel Monteith Loghrin, the Company Commander for “B” Company of the 18th Battalion which was published on May 11, 1916 in Drinkwater’s hometown newspaper, The Galt Weekly Reporter. Regrettably, this brave soldier died of his wounds sustained on April 25, 1916 and Captain Loghrin was writing a letter of condolence to Drinkwater’s mother.

The language of the men who were there speaks to the volume of German artillery fire. As Loghrin relates it was “like a snowstorm.” There is no doubt of the intensity of the combat the Battalion experienced, and these letters give some measure of the violence and intensity of that action.

[i] Submitted to the author by Allan Miller, curator of the 149th Battalion CEF – Lambton’s Own Facebook Group. Original article from: The London Advertiser. June 6, 1916.