There is no doubt that Captain E.R.V. Lloyd served with bravery and distinction during the World War 1 with the 18th Battalion. Enlisting as an “Original” on November 3, 1914 in Windsor, Ontario, he rose through the ranks. First as a private soldier and then had the rather unusual circumstance of being promoted from the ranks directly from Private to Lieutenant on June 20, 1916 after the Battalion had been on the Continent in active service since September 1915. It is not clear as to the circumstances that preceded this promotion but Lloyd was an engineer by profession and perhaps his advanced education and qualifications as such, coupled with his adherence to duty in the field, led to this promotion.

After his promotion, he was to earn the Military Cross for actions at the Somme in September and October 1916: “For conspicuous gallantry in action. When his company officers become casualties, he led his company with great courage and determination. He set a fine example of initiative and coolness.”

He was then promoted Captain December 11, 1916 and it was that rank in which he served at Vimy Ridge during the attack.

The 18th Battalion, along with the other units of the Canadian Corps fought aggressively and achieved successes which are legend but after April 9, 1917 the Battalion stayed in the line until April 14 when it was moved to rest billets at Bios-des-Alleux.

It was in the interval between the attack on April 9 to April 14 that the following communication was rendered by Captain Lloyd:

I have relieved (West Kents) 1 Company and have after much misunderstanding taken over 100 yds from 29th as instructed.

I have one man of C Coy wounded and one of my own.

I have a very commanding position – no dead ground and enemy position 1000 yds distant. Enemies Heavies are a damned nuisance, but hope to have ‘em put out of action tomorrow when our heavies move up.

I have taken over as near possible to your instructions. Can give you more detailed report when I have seen position in daylight.

If I am staying longer in here longer than 2 days I must ask you to relieve me as 2 of my platoons are almost exhausted having had a [very strenuous] time for 5 days previous to the “Rush” digging jumping off Trenches and cutting wire.

I think this fact was overlooked but hope you will bear it in mind.

My Telephone wire is down which accounts for my not reporting relief sooner.

Please send me 2 boxes of Red S.O.S. flares and also 2 boxes of white.

Enemy fires numerous flairs from Railway Track on our front. He is quiet at present – a little M.G. fire about 12.00 midnight.

He puts a lot of heavy stuff on my right.

P.S. Our Brigade have not relieved [6]th Brigade Vicars[v] [Vickers] gun behind us and 6th Brigade gunners have departed. We need them!!

The communication to the Adjutant of the 18th Battalion is very illuminating as it gives one an idea of the tone and timbre of the actions during combat the Battalion was experiencing. Even though during April 10 the Battalion worked to consolidate the trenches it had captured, preparing them for a potential German counter-attack, the Battalion was hampered by a loss of approximately 160 men from the original attacking strength of 600 soldiers. The Germans replied with very active shelling and with the Canadian and British heavy artillery slowly being brought forward to alleviate this situation with counter-battery fire, the Battalion and its members had a long five days of active service with all the physical work and hardships of the trenches, coupled with lack of rest, food, and relief from the shelling.

Captain Lloyd’s message shows the signs of combat stress. The message is dated incorrectly and he relates a mixture of positive bravado and concern for his position and tactical situation. He has a “very commanding position” indicating that his tactical position is defensible but the ensuing heavy German shelling “are a damned nuisance” to him and his men. Captain Lloyd further warns that if his company is to be engaged for more than two days they will need relief and specifically indicates that the reason for their current condition was the preparatory work his company was involved in before the attack on the 9th.  Some elements of the 18th Battalion were involved in digging jumping off trenches, trenches that extend into No Mans’ Land to allow for tactical surprise, and wire cutting (probably during the night) which would deplete the energy and moral of the men in his company.

In an almost apologetic tone Captain Lloyd reflects that the preparatory work his company did may have been “overlooked” but he does want higher authority to “bear it in mind” in regards to his request for relief. The balance of the message is a request for ammunition and flares so they can be prepared for further action.

Captain Lloyd had to wait his two days. On the night of April 13/14, the Battalion was relieved by the 24th Canadian Infantry Battalion and moved to the Divisional reserve in an old German Trench named Zwischen Stellung. In the morning of April 14, the Battalion moved back to its rest billets at Bois-des-Alluex

Captain Lloyd was to survive the war but, perhaps, the stress of combat accumulated to the point when he was invalided sick in May of 1917 and was transported to England for treatment of trench fever. On June 6, 1917, an examination of this officer found him “not particularly robust” but had gained weight since the previous medical board report. Eventually he was to be assigned to work with tanks and was involved in an accident where he lost the tips of his fingers. 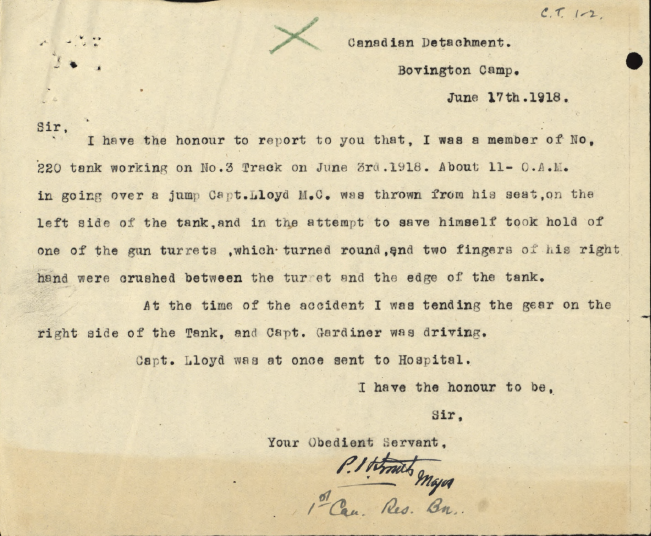 After serving diligently and with distinction Captain Lloyd was struck of strength on September 20, 1919 and indicated in his demobilization papers that his address would be the Electric Storage Battery Company, Marquette Building, Chicago, Illinois.

At this point history loses track of this soldier but he was to die at the age of 50 years old on January 2, 1939.

[i] Adjutant of the 18th Battalion. “Cadet” was the code name for this battalion.

[ii] This is a curious notation for the date. The material for this communication was found in the April 1917 war diary section and the material, when cross-referenced from the 18th Battalion’s March 1917 War Diary does not match any action that would be related to such a communication. The Battalion just entered the lines as a relief to the 19th Canadian Battalion. The date on the note may be indicative of the extreme fatigue the officer was experiencing at the time of writing this document.

[iv] Mills No. 5 refers to a version of the Mill grenade.

[v] It is not clear if this is a spelling mistake or a nickname for the Vickers machine gun.