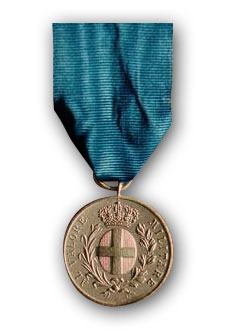 The Medaglia Al Valore Militare is a commendation created in 1833 by Carlo Alberto Amedeo di Savoia, King of Piedmont-Sardinia, to recognize exceptional valour in battle (but which does not warrant the award of the Military Order of Savoia). The medal has three levels: gold, silver, and bronze. Arthur Webber, who received the bronze medal, is the only member of the Newfoundland Regiment to have been honoured with this award.

During the First World War, this circular medal depicted the royal shield of Savoia under a crown. The recipient’s name was engraved on the reverse of the medal with the words “GUERRA DI 1915-1918″ (War of 1915-1918). The medal was worn on a blue ribbon. For each subsequent act of valour, the recipient was awarded a bar to wear on the ribbon.