Wounded and carried out by Private Harold Penwarden.

Word was received here by Mr. Herbert Kropf that his brother-in-law, Henry Rothwell Gerrard, died at Christie Street Hospital, Toronto, on Friday last at the age of 49 years.  He was Lieutenant in the 18th Battalion, C. E. F., during the war and returning was married to Miss Lovina Kropf, daughter of the late Mr. and Mrs. Jonathan Kropf, of Wilmot, who had also seen war service as nurse in France.  The deceased was a son of the late Charles and Mrs. Gerrard of St. Thomas, formerly of Lambeth, Ont., where he was born.  Since their marriage Mr. and Mrs. Gerrard had resided in Toronto where the deceased was connected with the Hind Lumber Co.  Owing to war injuries he was forced to have a leg amputated at the knee about a year and a half ago.  The funeral was held on Monday from his late home, Glenmount Park Road, Toronto, to Pine Hills Cemetery, East Toronto.  The funeral service was conducted under the rites of the Anglican Church and was attended by war veterans. The Last Post was sounded at the grave.  Mr. and Mrs. Herbert Kropf and family from here attended the funeral.1a” 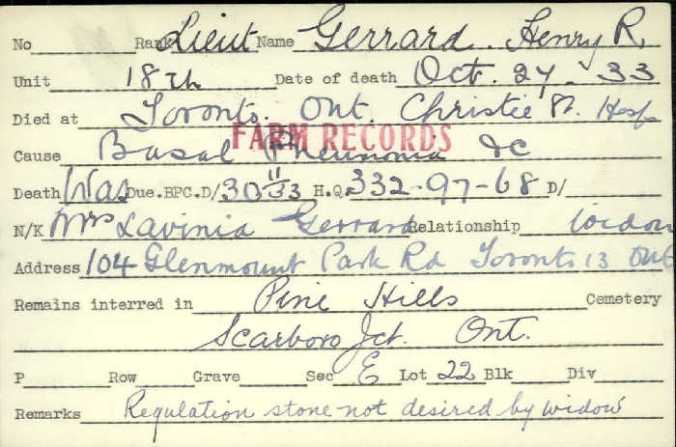