The 4th Canadian Infantry Brigade (4th C.I.B.) was engaged at Passchendaele in November 1917. Compared with some other Canadian Brigades and Battalions it was not as heavily engaged but the costs to the Brigade was high. The 2nd Canadian Infantry Brigade suffered a total of 1,268 casualties (killed in action and wounded) with 73 men taken prisoner over a four-day period spanning November 8 to 11, 1917. In contrast, the 4th C.I.B. was subject to a loss of personnel by all causes of 695 soldiers of all ranks between November 1 to 12, 1917, a span of thirteen days. 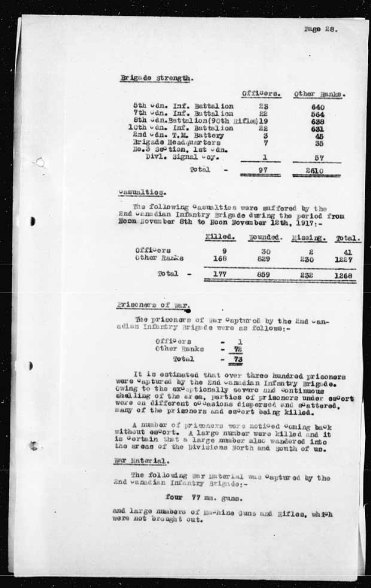 The 18th Battalion War Diary combines its entries for November 9 through 12, 1917 in one large entry spanning two pages and starts its description of these days thusly: “During the whole of this Tour, the Offices and men held this part of the line under the most severe conditions possible.”

The 4th C.I.B. enumerated is casualties for the period in its War Diary and the results are replicated below:

Below is a matrix summarizing the total casualties by category data:

The comparative differences in the numbers of soldiers of the 4th C.I.B. shows the numbers killed, wounded, missing (mostly missing, presumed dead and not prisoners),  and gassed are apparent and the totals reflect the outcomes of the battalions most heavily engaged in the actions over those dates, the 19th and 21st Battalions. The 19th and the 21st Battalions was involved in repulsing a German attack on November 3, 1917 at 5:00 A.M. with the German attackers able to gain a foothold in the trenches of the 21st Battalion. The Battalion, with supporting units, counter-attacked and repulsed the attack with the German troops retiring. Later that morning, at 7:30 A.M., the 19th Battalion was again engaged in covering the left flank of an Australian Battalion.

On November 10, 1917, the 4th C.I.B. was involved in its own attack starting at Zero Hour at 6:05 A.M. and this engagement was successful and from the Brigade’s report on operations the engagement did not note any unusual casualty rates. It did note in its War Diary that this “Attack very successful.”

Yet, the two reports of the actions of the battalions of the 4th C.I.B. and the 18th Battalion war diary entries do no fully reflect the tempo of the action at Passchendaele. Fifty, or 86%, of the fifty-eight men of the 18th Battalion that died that month perished between November 9 and 12, 1917. The data above only shows that twenty-eight men were killed in action, with a balance of seventy-five being wounded. Clearly the “Corrected List of Casualties” is not correct and does not reflect the terrible cost of the Brigades involvement at Passchendaele. 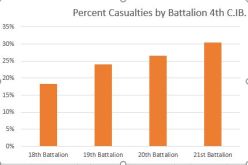 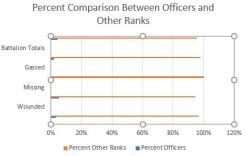 The data is illustrative of the ratios of killed, wounded, gassed, and missing and help to give context and meaning to the events that the battalions of the 4th C.I.B. But the report on operations for the Brigade for November 12 and 13 expresses the outcome of the Brigade’s experiences at Passchendaele:

The behavior of the officers and men during the whole of these operations was of the highest standard. The conditions of the ground and the intensity of the enemy’s shelling created difficulties of [a] most severe character. The evacuation of the wounded was one of the hardest problems of the whole tour and only be the greatest devotion to duty by the stretcher bearer parties was the whole area cleared before being turned over to the relieving Brigade.