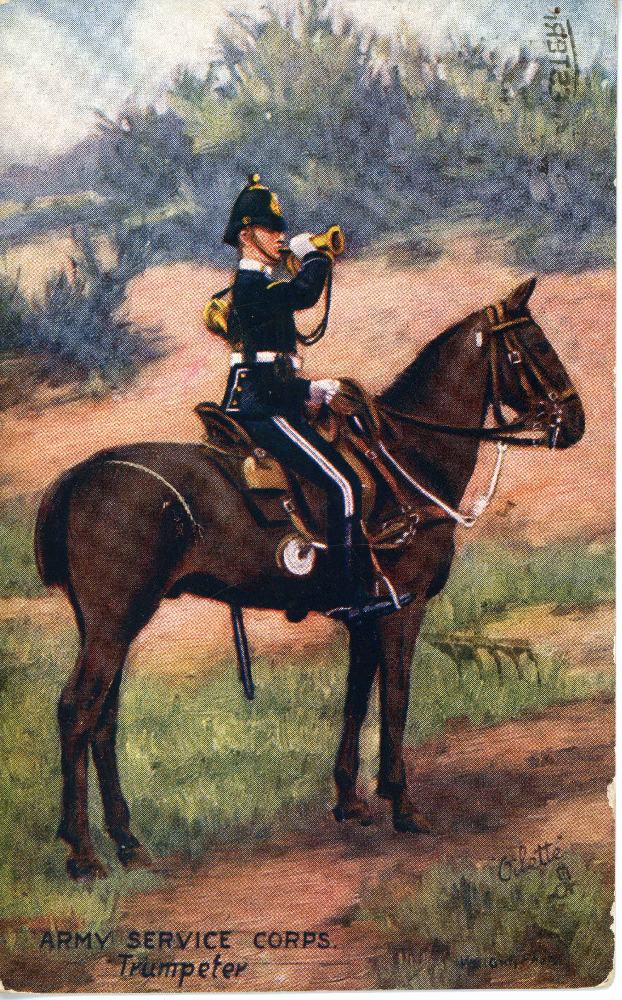 The evidence of the war experiences for Private Alexander Edward Blue of the 18th Battalion is greater than most, and less that others. One gets a sense of the man but how much of that is our projection and perspectives from our perspective influencing our perception of the evidence presented before us. Yet, delving into a person’s history involves connection and an extrapolation of the facts and evidence as best can be known.

The post cards of Private Blue, for this writer, somehow bring out the humanity of Private Blue in sharp relief to the antiseptic reports of his health during the time of his recovery of his wounds sustained in action near Hill 60 and The Bluffs in Belgium.

The post cards offer us some more information but they also add a mystery. Who was Ella Mitchell and what was she to Private Blue? The Bruce Remembers web site indicates in its page for Private Blue the following descriptions. For the card dated April 13, 1915 the site states that the card if from him to “Teacher Mitchell” and the second, and last card available, dated June 21, 1915 states that the card was “to his teacher E. Mitchell”. This is very likely given that his age upon enlistment was a very young 16 (almost 17) it would be natural to maintain contact with people he knew such as his family.

Somehow these postcards were saved and survived and each one tells a story.

The first post card was sent from London, Ontario. It is a Rapheal Tuck & Sons “Oilette” Postcard No. 9167[i]. It depicts an Army Service Corp Trumpeter and on the reverse offers the following information: “The Army Service Corps is responsible for the Supply and Transport services of the Army both in peace and war, and the duties of this Corps have led it to every campaign out of India in which the Army have been engaged.” The card is a part of a set of six sold in the United Kingdom and Canada and was first used in 1907[ii].

The back of the card shows the place of origin postmarked London, Ontario and dated April 13, 1915 at 11 PM. There is a destination postmark for Paisley, Ontario but the date and time are not legible. There is an interesting post cancellation mark over the stamp promoting the Western Fair, London, Canada from September 10 to 18.

Back then all the address you needed was a simple:

Private Blue’s message is almost as brief as the address:

And there is, as almost an after-thought, as if he did not expect a reply, a return address:

Simple and concise. He was set to leave for Halifax soon. The 18th Battalion left London, Ontario on April 12, 1915 and embarked on the R.M.S. Grampian on April 18, 1915. Therefore, it is highly likely that the card was literally mailed on the last day he was in London before the Battalion boarded the train(s) to go east to Halifax. The postmark is for the next day, the 13th, so this fact lends an immediacy, a connection to Private Blue and the next step in his journey towards service on the Continent.

Not much time passes and Private Blue sends another Tuck’s card. It to, is part of a set of six cards and this one has a decidedly Canadian theme[iii]. The six card set offers photographic scenes from the 1st Contingent taken during its time training on Salisbury Plain and were sold in Great Britain and Canada. Private Blue seems to have a preference for this type of card and the one he selects depicts two Canadian officers, sitting on a platform that King George V use to review the Canadian troops carving, using their swords, into the wood of the platform.

It is a wonderful card with its contrast of the quintessential themes that populate war. The young officers, barely men, taking time to carve, perhaps, their initials into the wood using a weapon, now largely ceremonial now that the mechanization and industrialization of war has taken hold in the 20th Century. The innocence of such an act is contrasted by the act itself and also the armed soldiers standing behind them.

The card description fills out the story: “Canadian Officers Carving their Names on the King’s Platform. ‘The general appearance and physical standard of the different units are highly creditable. I am glad to hear of the serious and earnest spirit which pervades all ranks, and I shall follow with interest the progress and work of my Canadians. KING GEORGE V’[iv]

Private Blue’s message to Miss Mitchell is not as brief. The card is post marked June 21, 1915 and the cancellation mark states “Sandling Camp”. It is addressed:

As with the previous card this card offers more questions than answers. The delay in sending the card and the brevity of writing. Private Blue’s use of the inclusive ‘we’ could mean that he is referring to other members of the Battalion from the Paisley area or the collective ‘we’ of his battalion mates. Further, the use of his initials may indicate a familiarity in writing, as if he has been writing Miss Mitchell regularly to the point he signs his letters with only his initials. Or, perhaps, he is feeling obligated in sending the cards and his brief note and initials serve to make an arduous task less so.

Whatever the case may be, and these can only be suppositions, letters and cards where the only viable means of communication during World War 1 and the volumes of mail that the Canadian Forces handled was legendary[vi].

Perhaps the arrival and the training schedule made it difficult for Private Blue to maintain a steady and adequate correspondence. June 4, 1915 had the Battalion located at West Sandling Camp with training[vii] starting at 6:30 a.m. indicating the soldiers rose much earlier to dress and have breakfast. Then the battalion trained to noon, had lunch and ended their training at approximately 6:00 p.m. with lights out at 10:00 p.m.

The post cards offer a partial insight into the life of Private Blue and Miss Mitchell. It is curious that these cards were saved and retained for history. How did they end up at the Royal Canadian Legion in Kincardine, Ontario to be digitized so they could be shared and analyzed later? Were the cards returned to the sender? Did the estate of Miss Mitchell donate them and if they did then they were important enough for her to keep as a memory to a former student.

These questions can probably never be answered but they allow us the opportunity to wonder, imagine, and explore a time so different from ours.

[i] For an excellent summary of the history of the company go here.

[iv] Not exactly a ringing endorsement. The review was held February 4, 1915 and the King sent a message to each soldier that was read to all units as they embarked to France that was more positive but still, like the other message, seems guarded, as if unsure who the Canadians will do. The message.

[v] This appears to be the date listed on the card. It is not fully legible but if it is correct Private Blue waited 17 days to send the card.