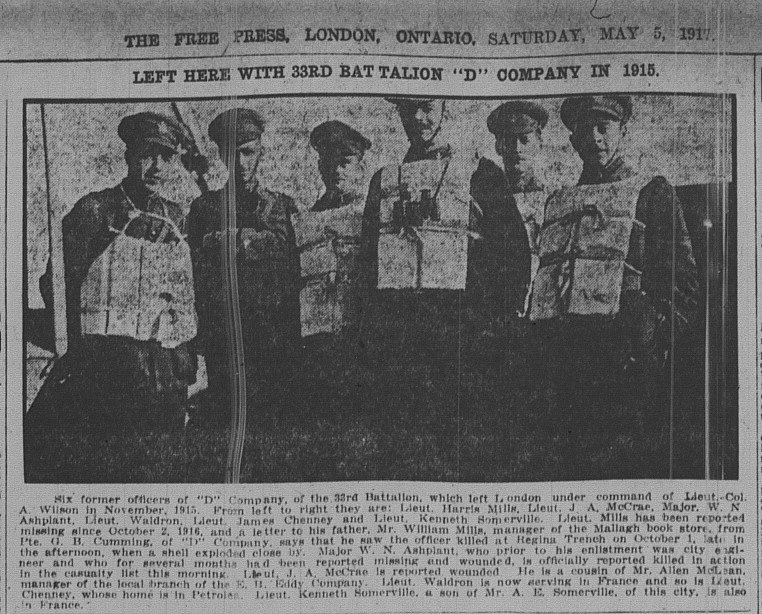 Six Canadian Army officers stand on the deck of the S.S. Lapland. They are of Company “D” of the 33rd Battalion and they are off to war.

The men are representative of the officer class of the Canadian Expeditionary Force. Solid middle-class backgrounds with either a skilled trade, such a watchmaker, or a profession, like barrister or civil-engineer. All, but one, were Canadian born, unlike the rank-and-file or “other ranks” who had a higher proportion of men born in the British Isles.[ii] They all were Imperial subjects and volunteers with various military experience.

The eldest man (with binoculars) has previous military experience in the artillery arm in the Boer War. He also had postings as an engineer in South Africa, the Bahamas, and South Nigeria, before coming to London, Ontario in 1913 and becoming the City Engineer for the city. He was Major William Norman Ashplant. He was one of the officers that helped to form the 18th Battalion when it was formed in Western Ontario. He was taken on strength November 28, 1914 and served with the Battalion until January 20, 1915 when he was transferred to the 33rd Battalion with the rank of lieutenant. Eventually he rose to the rank of major and it was in this capacity that he was serving when he was killed in action at the Somme.

On September 22, 1916 the 1st Battalion was in the front line. At midnight, Major Ashplant reported the relief of the 4th Battalion men in advanced saps and that heavy casualties had be sustained with number 13 and 14 platoons. The Battalion readied itself for the coming attack and Major Ashplant was responsible for the left side of the center of the line. During the attack the war diary records that he was seen leading his men, but presumed missing as the survivors of his unit could not give any definitive recollection of his actions before he went missing.

Lance/Corporal Hynds reported that he saw Major Ashplant in a shell-hole and had sustained wounds from machine-gun fire to his stomach and leg during the taking of the trenches at Courcelette. An attempt was made by the Battalion to retrieve his body on September 23, but to no avail. His body was never found and he is memorialized at the Vimy Memorial.

Two other men in the photograph also perished.

Lieutenant Mills disappeared on a follow up attack on October 1, 1916 serving with the 4th Canadian Mounted Rifles in the Regina Trench area. His body was recovered and buried at the Regina Trench Cemetery. Lieutenant Somerville was do die almost two-years later of shell-fire wounds sustained on March 15, 1918. Being initially blinded he caught in German shell-fire and wounded again in the left thigh and though efforts were made to save him he died of those wounds the next day at No. 57 Casualty Clearing Station.

Of the six men in the photograph half of their number perished in action. It is certain that their expectations for action and the result of their military service would have risks, but they may have been hard pressed to predict that half of the men in the photograph would die in battle. Officers comprised 5% of the soldiers that died of all fatal casualties[iii]. Offices made up approximately 4% of the total composition of the Canadian Expeditionary Forces which indicates that they had more exposure to the conditions that would lead to their death.

If they knew of each other’s fate one wonders what their facial expressions would be.

[i] This soldier is Lieut. George William Walrond.

[ii] This is especially true of the 1st and 2nd Canadian Contingents.

[iii] It is interesting to note that this table does not include any officers being killed accidently though the 18th Battalion had at least one officer, Lieutenant William Ormiston Brown, who was killed due to a grenade exploding during a training demonstration.