The seems to be no lack of enthusiasm for the Galtonians that joined the 18th Battalion to get into the fight. Even with the advent of static trench warfare due to the mechanization of combat from the use of rapid-fire weapons and massed artillery ending in casualties that had amounted to 9,182 Canadian casualties since the deployment of the 1st Canadian Division to Belgium[i]. These casualties only reflect the battles of Second Ypres and Festubert and does not account for those that died and were wounded during the time preceding or after these major actions.

This enthusiasm is reflected in one such soldier from Galt. He was a diminutive 5’3.5” tall when he enlisted at 20-years old. He was a handsome machinist who was working in Flint, Michigan, but, being a Galt native, he returned to his hometown to enlist to be with men who he knew. His enthusiasm to engage in combat with his battalion is witnessed in his concern about missing the opportunity to go to the Continent with his Battalion because he took ill suddenly.

All during this time Private Harry Drinkwater of Galt was missing these exercises and his illness was putting his chance to get into action in peril. He was chomping at the bit to get out of hospital so he would not miss the imminent departure of his Battalion to the Continent and battle.

The problem was he had suffered a burst appendix on July 4, 1915, and he had been operated on promptly on July 5, 1915. But the recovery would be slow, and at the time of writing his letter about his situation he would have had no idea exactly how long he would be in hospital care recuperating.

His letter does not express this fear of being left behind, it will only be later that this sentiment is express by other who knew and admired him.

His letter brings forth some aspects of military service during this time for soldiers of the Canadian Expeditionary Force (CEF).

Galt’s Ambulance Saves One of Our Own Soldiers[ii]

HAD THIS SWIFT MOTOR CONVEYANCE NOT BEEN AT HAD, HE MAY HAVE LOST HIS LIFE—”SO YOU KNOW I APPRECIATE IT,” HE WRITES IN LETTER HOME.

From the Royal Army Medical Corp Hospital at Shorncliffe, Kent, England, Pte. Harry Drinkwater, of the 18th Battalion, writes the following letter to Mr. And Mrs. Joseph Beer, 147 Water street south.[iii] In it he tells of suddenly taking ill and having to be rushed to hospital for an operation for appendicitis. As luck would have it, the motor ambulance called into service was donated by the people of Galt. “It rode as smooth as glass and at an awful speed,” says Harry. Later the doctor told him that if he had reached the hospital only one hour later, all would have been over. Galtonians would think it well worth it if the life of only one Canadian were saved through the agency of an ambulance, but it has doubtless performed this splendid service many times.

Private Drinkwater’s letter in full is:

“I am getting down to it to write you both although it has taken me a long time, hasn’t it? I am in the hospital now with, or rather I did have, appendicitis. I was operated on a week ago – that was July 5th. I took a pain in my side Sunday morning July 4th, and was operated on on Monday. My appendix had burst before I got to hospital and the doctor said to me: “Another hour, Drinkwater, and you would have been past saving,” so you see I had quite a close shave. I sure am used fine here. We have Canadian nurses and doctors, and everything in Canadian. One of my nurses is a Berlin nurse.[iv] Talk about eat – I eat everything in sight. I get a whole chicken everyday, and we get port wine and lemonade and jelly, in fact everything that is nice and light and tasty.

There are ladies in Shorncliffe who come around and give us books and writing paper and have a nice talk with us. The only think is that I’m afraid the battalion will be in France by the time I am better. However, I’ll have to get better and hope for the best. Please excuse [the] lead pencil and also the writing in bed. I received your letter about June 26th or 27th. It had been astray. It was posted in Galt on May 18th.

It was quite a coincidence, but the ambulance that took me to the hospital, about a 10-mile ride, in a stretcher, was an ambulance donated by the Galt Red Cross Society, so you know how I appreciate this gift from the people of Galt. It rode along as smooth as glass and it as going at an awful speed, for they wanted to get me [there] as soon as possible, and they did get me there.

PWell, I hope and suppose you are quite proud of Galt being a city now. It will be such a big place when I get back I won’t know it. I sit in bed and watch the ships going up and down the English Channel all day[v].”

There is a wonderful story of coincidence. That a Galt man was conveyed by an ambulance that was donated from the very city he was born and bred in must have been almost talisman like for Private Drinkwater. One can almost sense his relief at having an ambulance available to transport him to hospital, saving his life. The ambulance represents a common aspect of war life and society where individuals and organizations pooled financial and other resources in support of the war effort. The ambulance was, but one, of the many items offered to the soldiers of the CEF. Sometimes the money or items would be for specific units, usually hometown or regional units, and sometimes the resources raised would go into a general pool to be administer by the Red Cross or YMCA overseas.

A review of his medical records shows that the surgeon of record was Lieut.- Col. Henry Raymond Casgrain, a Canadian born surgeon who was serving at the Shorncliffe Military Hospital at the time of Drinkwater’s illness. On July 20th, 1915, Dr. William John Ogilvie Malloch, formerly of Toronto, examined Private Drinkwater and found that his “general condition good” but there was a “considerable discharge of pus” and that there was “healing by granulation”. Private Drinkwater would be in hospital a bit longer. 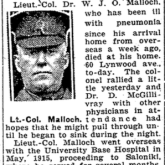 News clipping regarding his death.

Biography from the University of Toronto.

This operation and the length post operative treatment and rest is in stark contrast to a medical intervention for appendicitis and the resulting appendectomy now. The recovery time for appendectomies at the turn of the last century was typically over 3-weeks, with the patient under bed rest and minimal physical movement for some time.[vi] Now, with the use of modern surgical techniques and medicines, and without complications, a patient can be discharged the next, if not, the same day after an appendectomy.

Within 11-days the wound was healing well, and he was transferred to the Bevan Military Hospital from August 1 to 30, 1915. This recovery time must have been interminable for a young man missing the training of his unit. No doubt he was being visited by his comrades of his platoon and being kept up to date about the progress of the Battalion’s training, which only led to more frustration.

Private Drinkwater eventually got his wish with the help of the influence of an officer of his company, as he was discharged just in time to join his battalion on August 30, 1915, to the Base Company the next day and is recorded being then assigned to “D” Company on September 9, 1915 and he embarked to France with the Battalion on September 15, 1915 to fulfill his desire for active combat.

The importance and outcome of Private Drinkwater in realizing his goal is illustrated, sadly, by two letters.

On May 11, 1916, the Galt Reporter reported a transcription of a letter of Company “D” commander, 18th Battalion, Captain S.M. Loghrin[vii]. In the letter this officer related several details of Private Drinkwater’s death, but it was his desire to not be left behind that standouts out in the context of this story:

“I remember before leaving England he had appendicitis and was to be left behind. He came and pleaded with me to be taken with the 18th Battalion. I spoke to the doctor and we arranged it, and for a time I lightened his duties until he was strong and well.”

A Welshman serving with the 18th Battalion wrote about Private Drinkwater regarding his bravery at the Battle of St. Elois Craters:

“Now the hellish sounds of crashing bombs rent the air. Fritz was getting his iron rations. Then it was hell let loose. The enemy opened up this artillery, and huge shells raced through space, high explosives and shrapnel burst among the Canadians. The sky was now lit up with hundreds of flares of many colors. Our artillery was more than equal to the Germans and the guns poured forth murderous volleys. While the battle was at its highest, young Drinkwater, who was in the think of the hellish destruction, was called upon as guide for an officer. From place to place he led the way unflinchingly. The shells falling all around and the very earth quivering from the might explosions. Yet he accomplished his heroic task. Then again he went back to the crater, and this time he volunteered to bring in one of our bombing parties just before daybreak. Again he was successful, bringing back every man safely. It was, indeed, a plucky daring deed, and the hero came through unhurt.”

Private Drinkwater’s desire to serve was recognized by his peers, and him being saved by an ambulance donated by the citizens from Galt may have led to the saving of more men during the confused and perilous battle for the St. Elois Craters as witnessed by the Welshman, Bartlett. His desire may have been fueled by youthful and impetuous thoughts but having served with his comrades for several months before the action at St. Elois created the bonds of shared combat experience and personal privations would have replaced any immature feelings of wartime zeal. 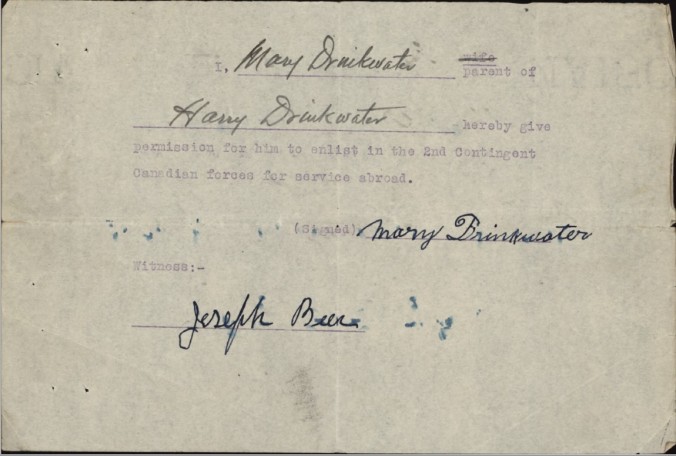 Ironically, Joseph Beers, the neighbour who lived just down the street from the Drinkwater’s, witnessed the permission form that Private Drinkwater’s mother had to sign in order to allow him to enlist. At least two families mourned when the news of Private Harry Drinkwater’s death was announced.

That ambulance that Galt donated saved more than one man by saving one man.

[ii] This letter has been transcribed and formatted for greater clarity.

[iv] Berlin would be familiar to a modern reader as the City of Kitchener. For more information about the name change from Berlin to Kitchener see this blog post.

[v] The Channel was, and is, one of the busiest navigable transportation routes in the world. During World War 1 16,500,000 souls where transported between England and France (both ways and does not include American personnel movements) and French freight traffic increased 3-times that of peace-time levels at French Channel ports. SOURCE

[vii] Captain Loghrin was later to perish at the Somme and is commemorated at Vimy Ridge.