On December 21, 1915, the Galt Daily Reporter reported that the 18th Battalion was in the front line based on letters dated November 30, 1915, from the “boys of the 18th Battalion”. The letter gives some perspective of the attitudes of the soldiers of this unit, thought, sadly, none of the “boys” who wrote the letters in which this story is based are identified.

Of note to the geographers out there, the place name “Petrolea” was the spelling of the now known Petrolia, Ontario. This indicates that the story originated from a newspaper from this town and were written by natives of that town or immediate area. The Galt Daily Reporter would have picked up this story as there were approximately 32 Galt[i] native sons who where serving with the Battalion[ii].

COMFORTABLE AND COMPARITIVELY SAFE, EVEN IN ADVANCED POSITION.

Petrolea. Dec. 21.:– Letters dated November 30th from the boys of the 18th Battalion show that some of that division are doing service in the first line of trenches within 100 yards of the Germans.

Even in this extremely advanced position the boys report that they are comfortable and comparatively safe, thanks to the excellent construction work that has made the line an impregnable, immovable defense. The first days in the trenches afford greater pleasure than any days since enlistment. The feeling seems to be that our fellows have it over the Kaiser’s soldiers in numbers, equipment and soldiership, any time a forward move is set down on the program. But they wait with patience, knowing the strategy of the Allies is in skillful and careful hands. The boys promise to be home for Christmas in 1916.

There had been a series of stories about the Galt “boys” prior to this one, such as the death of Sergeant Spooner on November 14, 1915, which the Galt Reported on in a story published on November 22, 1915. It is interesting to note that the tone of this story relates that the soldiers are “comfortable and comparatively safe”. Comparatively being the watch word as to the potential threat to life and limb to a soldier on the front lines in the Ypres sector. There is an interesting information lag in the presentation of the context of the “boys” experiences in the “first line” as the Battalion had moved into active duty in the front line of their assigned sector in late September with “B” and “C” Companies being placed on duty in the first line on September 27, 1915, and the Battalion would experience first line service five times from September to November 30, 1915. 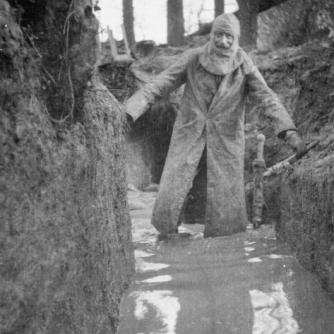 Yet, the tone of the story would indicate that the Battalion’s experience in the first line was a relatively new or novel experience, when, in fact, the Battalion had been in active service and suffered its first casualties of dead and wounded, not to mention accidents.

One wonders what the original text of the letters read that would lead to the edited content of the story to relate, “The first days in the trenches afford greater pleasure than any days since enlistment.” Perhaps the change from the tedium of training and a strong feeling of martial patriotism led to such an interpretation. This type of jingoistic rhetoric was common and many examples of this type of writing exist but are often offset by many of the contrasting letters of other soldiers of the 18th Battalion who give their stark impressions of the terrible experiences they had during combat.[iii]

The article closes with a reference to the confidence the letter writer(s) have in their equipment, soldiery, and their numerical superiority with the prediction that the war would be over by Christmas 1916. Ironically, the letters from August 1914 from the troops on both sides of the conflict made the same prediction.

This news article may have given some of the families in Galt some comfort, but many would have been aware of Sergeant Spooner’s death earlier in that month and that dissonance between the hopeful and positive rhetoric of this letter with the sad reality of the deaths to come of many Galt “boys”  as the war progressed through its deadly grind would have been a bitter pill for many watching developments on the Continent from so far away. Many would have felt some comfort from the article, and many would have been sceptical of the war ending in one-year.

From today’s perspective the article helps illuminate that time, place, and experience is not static. Petrolia was Petrolea; some of the “boys” still held strong, patriotic feelings towards their martial experience and the camaraderie of combat; that these feelings where expressed in the hope that the Triple Entente’s material, combat skills, and numerical advantages would lead to victory in a year are, given the context of that letter at that time, and that place, wholly realistic expectations. Our hindsight knows better, but is not necessarily superior as we have the unfair advantage of living in the future and looking at others’ past.

[i] Galt, Ontario was amalgamated with Hespeler and Preston, Ontario, as the City of Cambridge in 1973.

[ii] For a more complete accounting of First and Second World War soldiers from Cambridge service see “The City of Cambridge Honours Our Veterans” in PDF format and a list compiled by an unidentified local Hespeler man at this page.

[iii] For a sample of a more realistic description of combat conditions see Lieutenant Vincent McCarter Eastwood’s exchange with a fellow officer about conditions at Passchendaele.